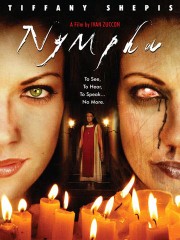 Daniel S
½ March 31, 2013
I'm pretty sure the highlight of this movie is Tiffany Shepis naked. That being said..it's a long and overdrawn romp that runs for far too long and the plot gets more and more contrived to the point you really stop caring about the movie and keep glancing at your watch. Find something better to watch, because good grief, this one is hard to watch

Pete S
½ May 13, 2012
It is very cold and empty, ultimately becoming very draining as it is more difficult to watch as it goes along.

Pete S
½ January 6, 2012
It is very cold and empty, ultimately becoming very draining as it is more difficult to watch as it goes along.

Brian S
½ December 8, 2010
A total mess, a sort of mystery wrapped in an enigma wrapped in crap and deep-fried in pointlessness. The story seems to have been made up as they went along. Why would a group of nuns start a religion -- sanctioned by Catholic clergy, no less -- based on a self-mutilating child of incest who went on to marry her brother? THAT'S the basis for a new religion? Seriously? Even the title of the movie is meaningless; the self-mutilating incestoid is named Ninfa by her father/grandfather. I guess "Nympha" makes the movie sound like it might be interesting.

Tiffany Shepis, for some reason, travels to a convent in Italy at the behest of an American bishop. She wants to lead a religious life of silent contemplation. Instead, nuns dressed in red and their drunken doctor/slave make her deaf, blind, mute and boil her hands while they're at it. But she's, for some reason never explained even a little, in some sort of psychic contact with the aforementioned Ninfa and her crazy father/grandfather who, just because he's really crazy, does things like cut off his own leg and keep piles of dead animals in his attic. Ninfa and Tiffany are super, super scared of that. And thereby hangs a... tale?

No, a mess. Nothing here makes sense and the ending is a HUGE let-down after all the build-up. Other people's repressed memories just aren't that scary when you've been led to expect something supernaturally horrible by every clue in a film. It plays like director Ivan Zuccon simply didn't know where he was going at any point in this awful mess, so he just decided to run the whole thing into a wall in the end.

This could have been a perfectly good nunsploitation film, or a good horror film, or a fine drama. But it isn't any of those things because it never commits to any of them. Punt this one.

Robin H
½ August 5, 2010
It was horrible, very dull, tedious and not frightening at all. It's an amateur movie.

Marysia K
January 19, 2009
Ivan Zuccon's first movie in English (all his previous films are in Italian). One more step up in quality, every movie Ivan makes is better than the last - I can't wait to see where he ends up.

Tim (Loves Jen) [TEAM BLACK OPS]
November 6, 2008
I just can't get into this movie too much. But you get to see a full frontal of Tiffany Shepis.

Carl N
October 23, 2008
This is a strange film all round, dark and creepy, Weird, a little confusing, but peculiarly fascinating. You cant really classify this film as nusploitation. Although you do get the obligatory nudity and a lesbian romp. But this film doesn't rely on this. It goes far beyond that. It takes place in a convent of a new religious order. The film can be quite brutal in places. We see nuns putting a poor girl (Tiffany Shepis) through her paces, enduring physical and mental torture, so that she will become closer to god? During all this Tiffanys character has visions of the Convents past, visions that it was the house of a young girl named Nympha and her religious and violent grandfather. And it just gets weirder from there. The digital FX are amazing for a low budget film. The acid in the eyes is a shocker!

Lupus D
½ October 10, 2008
This has such great lightin for a cheapo horror and it is also decent among the nunsploitation flicks. Perhaps better pacin wouldda made it better. Long live the C-grade slashers!