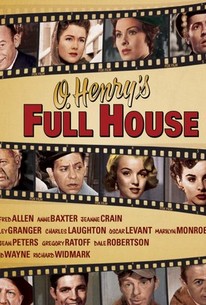 This anthology film assembles five respected directors and a top-notch cast to bring a handful of stories by the great American author O. Henry to the screen. In The Cop and the Anthem, a tramp named Soapy (Charles Laughton) tries to get arrested so that he can spend the winter in jail, only to find that is not as easy as it used to be. Marilyn Monroe appears in this episode as a streetwalker. The Clarion Call features Dale Robertson as Barney, a cop forced to arrest an old friend, Johnny (Richard Widmark). Anne Baxter stars in The Last Leaf as Joanna, an elderly woman who sees her own illness reflected in the fall of the autumn leaves; she's convinced that when the last leaf drops from the tree outside her window, her life will go with it. The Ransom of Red Chief concerns Sam (Fred Allen) and Bill (Oscar Levant), two novice kidnappers who kidnap a child, only to discover that his parents don't want him back -- and after a few hours with the brat, they find out why. And The Gift of the Magi tells the story of a pair of cash-strapped newlyweds, Della (Jeanne Craine) and Jim (Farley Granger), who struggle to get each other the perfect Christmas gift, with unexpected results. John Steinbeck narrates.

Philip Tonge
as Man with Umbrella

Richard Rober
as Chief of Detectives

Will Wright
as Manager

John Steinbeck
as Narrator
View All

Henry Hathaway's segment is a fun mix of historical and crime film.

The unquestionable pinnacle is Howard Hawks' energetic "The Ransom of Red Chief."

As with all such films, the interest level is entirely dependent on the individual stories -- and four of the five are very good indeed

Despite of being too dated, it fared relatively well. Maybe it didn't work for me that well because I watched it while I was home alone.

An Amazing cast and five very talented and legendary directors bring to life a series of short stories written by O. Henry. A really great film, combined with the timeless and memorable stories that inspired it. Makes O. HENRY'S FULL HOUSE, a very entertaining and moving motion picture experience.

Some wonderful short stories interlaced with a few duds, all introduced by John Steinbeck, the one that towers above the rest is "The Last Leaf" touching and beautiful with delicate lovely performances from all three actors.