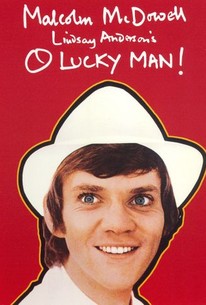 Who better to play the coffee salesman protagonist in Lindsay Anderson's O Lucky Man than Malcolm McDowell, who himself peddled coffee in his pre-acting years? (In fact, the plot of the film was McDowell's idea.) This rambling 166-minute effort features McDowell as a slave to the Work Ethic, never allowing himself to be dissuaded from his work despite such distractions as fatal car accidents, crooked cops, physical torture, a stint as a laboratory "guinea pig," and seductive customers. The hallucinatory quality of O Lucky Man is augmented by having most of its supporting cast (Ralph Richardson, Rachel Roberts, Helen Mirren et. al.) "double up" in parts: for example, Rachel Roberts plays McDowell's boss and two of his customers, one French, one English-and all of them end up in bed with the hero. Watch for director Lindsay Anderson in the closing scene, bringing the events in the story full circle.

No less than an epic look at society is created in Lindsay Anderson's third and most provocative film.

O Lucky Man! is a disappointment.

O Lucky Man! clearly has a number of things on its mind, but as a movie, it is a very mixed bag.

It's as audacious as anything made in the 1970s, running three hours without much of a plot.

You'll wonder how long this can go on, but over the course of two DVDs you'll likely find yourself enthralled nonetheless.

Frequently there is more point to the music than to the movie which tends to dissipate its efforts through sheer bulk.

The best film made by Lindsay Anderson.

Sometimes comic, sometimes grotesque but consistently intriguing, this is a spectacular, sprawling satire built around its surreal set-pieces and driven by a charismatic performance by McDowell.

Rich, densely layered, disturbing, unique and strangely satisfying in a way few films ever have been.

Courts brilliance by tempering its cynicism with a hefty dose of protracted, but never quite gullible, innocence in its main character.

A coffee salesman takes a rambling tour of 1970's Britain. There comes a time when you think you know something about movies: What is good, what is bad, how things should go, how things should work, etc., etc. Thank goodness a movie comes along now and again that says "no you don't - you know nothing!" Oh Lucky Man! is like Pulp Fiction and High Hopes - it is a smarter film than you are a film watcher. After a build up like that you might expect for me to say that this is a perfect film or that everything works. But it doesn't. The story rambles and pauses, moves left and right and tries to keep the audience on its toes. The humour is mostly black, but very true to life. People are often selfish and acting for themselves - while Travis (our hero - if we can call him that) is quite kind and thoughtful. Like an Adam that has been put in to the modern world rather than the garden of Eden. I have seen this film twice. Like many films, once when I was too young to understand it. It is quite sexual graphic at times and that stuck in my memory for a long time. In one scene a black man plays out a scene at a sex club - and to this day I am puzzled as to what this represents. That the entirely white audience see the black as an entertainer to laughed at or cheered. That this is his only place? Most anything-goes films are comedies, and while this has plenty of black comedy, I see it as social comment. Life has moved on from the 1970's, people have escaped their own class more, women have more of a role to play, people get away with things less. But no one can say - even viewing today - that it doesn't tell plenty of home truths about the UK. (People that live outside the UK and never visit must be puzzled by what goes on here. I bet you would have to answer hundreds of questions if you watched it beside, say, an American.) Lindsey Anderson sees all authority as being violent, ugly and corrupt. This is the kick in the balls society that existed before CCTV in police stations and human rights acts. Where people were fitted up for crimes that the police knew they couldn't have committed. I never wanted to walk down a time tunnel to 1970's Britain and this film is probably the last tie I have to that ugly and desperate decade. Oh Lucky Man! is one of the best films ever made. It has something that few films ever have - instant cult appeal. You could watch this over and over again and not get bored with it, see something different and learn something new. They should bring it back as a musical or a stage play. While not every scene works and not every tune pleases, it is cinema from another world that we never quite had - but might have had if only the money men of Hollywood hadn't made their ugly mark on the world. If you think film is about anything more than simple entertainment Oh Lucky Man! is a must-see...

I really loved this movie, it's a sort of sequel to If... with McDowell's character getting into all sorts of crazy situations after taking a coffee salesman job. It's got everything you want in a movie: action, adventure, romance, horror, comedy, etc. If you're a fan of his you have to check out this crazy movie. I love it.