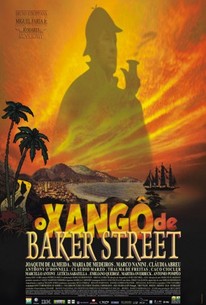 Rio de Janeiro, 1886. Actress Sarah Bernhardt performs at the city's Municipal Theater, captivating the local audience enthralled by French culture. The city is at her feet, and even the Emperor Dom Pedro II comes to pay his respects. He confides a secret to her: the disappearance of a precious Stradivarius violin presented by him to the charming widow Baroness Maria Luiza. The actress suggests he hire her friend, the legendary British detective Sherlock Holmes, to solve the case. Under the heat of the tropical sun, the lives of Holmes and Watson are changed forever, as they find themselves knee-deep in a cultural hodgepodge that includes all the standard Brazilian tourist fare.

There are no featured audience reviews yet. Click the link below to see what others say about O Xangô de Baker Street (The Xango from Baker Street)!