The Object of My Affection1998 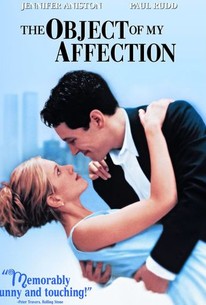 Critics Consensus: Despite heartfelt performances from Jennifer Aniston and Paul Rudd, The Object of My Affection suffers from too many plot contrivances and frequent turns into rom-com sappiness.

Critics Consensus: Despite heartfelt performances from Jennifer Aniston and Paul Rudd, The Object of My Affection suffers from too many plot contrivances and frequent turns into rom-com sappiness.

Critic Consensus: Despite heartfelt performances from Jennifer Aniston and Paul Rudd, The Object of My Affection suffers from too many plot contrivances and frequent turns into rom-com sappiness.

The Object of My Affection Photos

Nicholas Hytner (The Crucible) directed this Wendy Wasserstein screenplay, adapted from Stephen McCauley's novel, about the romantic mismatch of a gay man and a young pregnant woman. When literary agent Sidney Miller (Alan Alda) and his wife Constance (Allison Janney) have a dinner party, Constance's social-worker stepsister Nina Borowski (Jennifer Aniston) attends without her lawyer boyfriend Vince McBride (John Pankow). Also present are gay schoolteacher George Hanson (Paul Rudd) and his lover, Dr. Robert Joley (Tim Daly). George learns from Nina that he's being dumped by Robert, a scene ensues, and Nina then invites George to stay in the spare room of her Brooklyn apartment. Nina still has sex with boyfriend Vince, but during late-night talks, she begins to bond with her gay roommate. Nina and George take dance lessons at the local senior citizen's community center, and Gershwin's "You Were Meant for Me" sets the tone for romance as the two become soul mates. Unfortunately, shortly after their love blooms, Nina learns she's pregnant by Vince, who is no longer the object of her affections. Instead of telling the unwanted Vince right away, Nina asks George to join her in raising the child. George stays on, but in the months that follow, he also begins to see men again. Robert takes him along to a Connecticut conference where drama critic Rodney Fraser (Nigel Hawthorne) has Paul James (Amo Gulinello) in tow. George and Paul have an instant attraction, and this prompts everyone involved to reassess their emotional commitments. ~ Bhob Stewart, Rovi

Natalie B. Kikkenborg
as Girl at Community Center

Critic Reviews for The Object of My Affection

Rudd and Aniston are sad and believable as star-crossed lovers who know they can never be together for reasons beyond their control.

Aniston, a friend in need of a solid movie script... finally gets one courtesy of Tony-winning playwright Wendy Wasserstein.

The viewpoint may not be exactly fresh, but [screenwriter Wendy] Wasserstein... delivers the heartfelt message that, male or female, gay or straight, black or white, old or young, the important thing is to pick some one person and make it work.

It is the sort of story best left to the French, who take great delight in such trifles.

The mixture of sincerity and sitcom phoniness is bewildering at times, but on some level, I guess, the film works.

Unashamedly a chick-flick, but no less enjoyable for it.

There's ultimately little doubt that The Object of my Affection fares best in its entertaining and compulsively watchable first half...

You come away with a remarkable sense of the filmmakers and actors working together harmoniously as they delve into the heart of relationships between friends and lovers.

A sweet, Saturday-night-in-front-of-the-tube romance that, while it doesn't quite redefine any conventions, offers an appealing look at the line between love and friendship.

The Object of My Affection is one of the best romantic comedies I've seen in ages.

At the core... is the college dorm debate question: Can a man and a woman live and love together without sex? The answers ... in a typical dorm room are ... as interesting...

Audience Reviews for The Object of My Affection

Jennifer Aniston made some interesting choices in taking movie roles in the nineties, before she became queen of the agitating awful rom-coms. This indie comedy, about a social worker and her gay roommate, shows them having a strained relationship while also dealing with their own love lives. I'm torn on whether or not I genuinely like this film, because the characters are enjoyable to watch, and the way they maneuver between the blurred lines of sexuality is interesting, but the way sexual orientation is depicted leaves me cold. So many films have tried to characterize sexuality as a spectrum that involves men who are gay experimenting with women to a point of domesticity. This was done successfully on "Will and Grace" and the same concept was exploited in "Gigli" but to an outside observer it rarely makes sense. Here, at least, it's clearly defined that George has no interest in a sexual relationship with Nina, and just wants to help her raise her child, but Nina is unaware, which tilts perspective. This film handles its characters' motivations rather well and shows the dysfunction in their relationship with aplomb, but it would be great for once to see a gay man and straight woman be friends without the added drama of sexual tension. Otherwise it's a sweet little film that explores modern day relationships and their many layers.

This glossy, unusual romantic comedy is great with the appealling cast including Jennifer Aniston and Paul Rudd.

A pretty good movie, though I did feel a bit disappointed in the end but it was the proper way to end it I suppose. Good to watch if you're in the mood for something emotional I suppose.

What starts out as a fairly basic story turns into a complex love story and then ends up as a mess.

The Object of My Affection Quotes