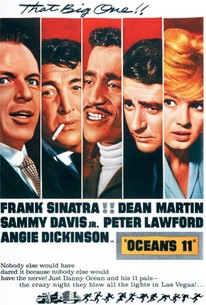 During a Los Angeles Christmas, a group of 82nd Airborne vets assembles under the leadership of gamblin' man Danny Ocean (Frank Sinatra) to rip off five Las Vegas casinos just after the stroke of midnight on New Year's Day. Playboy Jimmy Foster (Peter Lawford) joins in the scheme because he's sick of needing his oft-married mother's money, especially now that she's about to wed Duke Santos (Cesar Romero), a self-made man with all sorts of underworld ties. After he receives the news that he could die at any time, newly released convict Anthony Bergdorf (Richard Conte) reluctantly agrees to participate so he can leave some money to his estranged wife and young son. Ocean's own wife, Beatrice (Angie Dickinson), doesn't think much of her husband's promise of a big score to come, but her quiet protests don't dissuade him. With Las Vegas garbage man and fellow vet Josh Howard (Sammy Davis Jr.) and several casino employees among their number, the titular band of thieves have just a few days to get ready for their caper. When Duke Santos, Jimmy's mother, and one of Ocean's discarded paramours all show up in Sin City at the same time as the veterans, the crew's perfect plans face some serious hurdles. ~ Brian J. Dillard, Rovi

Norman Brooks
as Himself

The picture is very plush... so much a display of performers who act as if a mere appearance would induce hysteria in the adoring public, that you wonder who's fooling whom.

The intrigue is in the details that initially passed you by. The men, for instance, are all army veterans. They address each other by rank and their booze-fuelled camaraderie seems to be an expression of their status.

There are many incidental pleasures to be had.

Laboring under the handicaps of a contrived script, an uncertain approach and personalities in essence playing themselves, the production never quite makes its point, but romps along merrily unconcerned that it doesn't.

The heist itself, though, is a superb piece of movie-making.

It's an autopsy of the Greatest Generation's self-mythology.

The British tackled a similar plot a bit earlier in The League of Gentlemen and made a better job of it. Ocean's gang includes such "clan" stalwarts as Dean Martin, Peter Lawford and Sammy Davis Jr.

a classic film with plenty of spunk

Considering the iconic status of all involved, the result is disappointing.

Sinatra, Davis, and Martin performed their club acts at night and worked on this Las Vegas-set film during the day, and the good time they were having fairly jumps off the screen.

Oceans 11 always is a fun thing to watch, its one of those movies that make us love going to the cinema.

Whilst I did watch this the wrong way around, ie. The remake before the original, I was pleasantly surprised with the differences between the two. Whilst the main plot sort of remains the same, this version does give you songs from the Rat pack and managed to give a surprise ending differing from that of the remake. Both were cleverly crafted to suit the era of the heist and the technology surrounding it, whilst using the individual skills of the crew.

One of the few cases when the remake is much better.

this movie is the original heist movie, and one of the rat pack's best