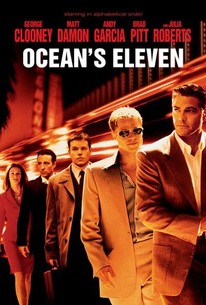 Critics Consensus: As fast-paced, witty, and entertaining as it is star-studded and coolly stylish, Ocean's Eleven offers a well-seasoned serving of popcorn entertainment.

Critics Consensus: As fast-paced, witty, and entertaining as it is star-studded and coolly stylish, Ocean's Eleven offers a well-seasoned serving of popcorn entertainment.

Critic Consensus: As fast-paced, witty, and entertaining as it is star-studded and coolly stylish, Ocean's Eleven offers a well-seasoned serving of popcorn entertainment.

A rag-tag group of con artists and ex-cons team up for the heist to end all heists in this high-profile remake of the 1960 Rat Pack favorite. As with its predecessor, Ocean's Eleven opens with its titular hero Danny Ocean (George Clooney stepping into the Frank Sinatra role) eager for a new challenge. The similarities to the original end there, as Ocean conspires with his old pal Rusty Ryan (Brad Pitt) to rob 150 million dollars from an underground vault that serves three of Las Vegas' biggest casinos. Between the two of them, they recruit nine other men, each with his own criminal specialty, to assist in the mission: moneyman Reuben Tishkoff (Elliot Gould), card dealer Frank (Bernie Mac), pickpocket Linus (Matt Damon), aging con artist Saul (Carl Reiner), British explosives pro Basher (Don Cheadle), techie Dell (Eddie Jemison), rude-boy brothers Virgil (Casey Affleck) and Turk (Scott Caan), and professional acrobat Yen (Shaobo Qin). What Ocean doesn't tell the group is that there's another reason he's coordinating the heist: the three casinos they're robbing are all owned by ruthless gambling mogul Terry Benedict (Andy Garcia), who just happens to be married to Ocean's former love Tess (Julia Roberts). Ocean's Eleven was updated by scribe Ted Griffin and marked the third feature shot by director Steven Soderbergh under the alias Peter Andrews. ~ Michael Hastings, Rovi

Cecelia Birt
as Board Member

Paul L. Nolan
as Board Member

Carol Florence
as Board Member

Lennox Lewis
as Himself

Wladimir Klitschko
as Himself

Henry Silva
as Himself

Eydie Gorme
as Herself

Angie Dickinson
as Herself

Steve Lawrence
as Himself

Roy Uwe Ludwig Horn
as Himself

Larry Merchant
as Himself

Richard Steele
as Himself

Topher Grace
as Himself (uncredited)

Joshua Jackson
as Himself (uncredited)

Holly Marie Combs
as Herself (uncredited)

Barry Watson
as Himself (uncredited)

Shane West
as Himself (uncredited)

Cecelia Ann Birt
as Board Member #1
View All

As we live and breathe, Steven Soderbergh is making the best kid-stuff for adults since Howard Hawks put Cary Grant in a sombrero. It's no small achievement.

Fun heist movie for older kids and their families.

Propelled by a jazzy David Holmes score, Ocean's Eleven bounces along with finger-snapping high spirits. This time out the versatile Soderbergh has cast himself as a sleight-of-hand artist.

A lark for everybody concerned, including the audience.

This wholly enjoyable entertainment sees Soderbergh setting himself a new challenge - the hi-tech robbery procedural - and relishing the clichés even as he freshens them with a dab of polish, wit, pace and a light touch of irony.

Twenty years on, Ocean's 11 has become a time capsule, capturing not only the moment between Las Vegas's split identities, but also the last go-round of the Movie Star era.

It's a compulsively re-watchable, funny, exciting, and altogether fun movie, one of the best of director Steven Soderbergh's career. (20th anniversary)

Ocean's Eleven was and is a film worth watching, and there is practically a laundry list of reasons why that is.

One big, slick heist, dripping with style, and bobbing with energy...

A big-budget, stylish heist film with an A-list cast, well-suited to match.

Quite possibly one of the best remakes ever made

Steven Soderbergh's take on the 1960-remade heist film is a sleek and impressive display that's charming from beginning to end. George Clooney and the star-studded cast perform with such smooth and often humorous swagger that is both modern and memorable than the original. 4.5/5

A rarity--a remake that's better than the original. 11 men led by Danny Ocean (George Clooney) prepare to rob a vault linked to 3 casinos in Las Vegas. His partners in crime include Brad Pitt, Carl Reiner, Elliot Gould, Casey Affleck, Matt Damon and Scott Caan. Also, the casinos are owned by Tery Benedict (Andy Garcia) who is romancing Ocean's ex-wife Tess (Julia Roberts). Fun, engrossing, just simply the most enjoyable film of 2001. It moves smoothly, the entire cast plays it cool and easy and Steven Soderbergh directs it with flair and intelligence. Yes, it's light; yes, it's a trifle but it's so FUN! I really loved this film. Affleck and Caan are hilarious as bickering brothers. My only complaint--Julia Roberts (the only woman in the cast) is shot very cruelly. She's beautiful so why does she look so bad? Aside from that this is a fun movie. Just sit back and enjoy. 3 1/2 stars Updated from 9-27-07

Movie about a group of guys who rob three Las Vegas casinos in one night. My fave scenes are when George explains the plan to the guys and when he forgets the batteries for the remote. Brad, George and Andy are hot! The cast are great, the plot and the twist at the end are all brilliant.

I may be overlooking something here, but everything just seems entirely smooth with this film. As Danny Ocean (George Clooney) is released from prison, he assembles a team of eleven people to rob three of the most profitable casinos in all of Las Vegas. The plot is huge and the payoff will be gigantic. They are in the running for over 163 million dollars. The cast is brilliant and the writing is superb. Sure there may be some annoying edits throughout the film and there will be some noticeable stumbles during the robbery, but "Ocean's Eleven" delivers on everything. When the film ended, I applauded it for making me believe that I was watching more than just another heist film. This film is terrific!