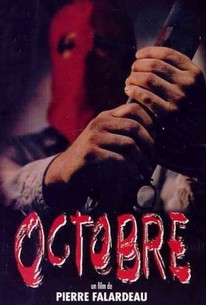 This Canadian psychological thriller, based upon a true story wherein a Quebec cabinet minister was kidnapped in October 1970 by French-Canadian terrorists, has a pro French-Canadian sentiment that is guaranteed to spark controversy among northern viewers. The film is especially as the tensions between French-Canadians and the Canadian government remain high. The story is presented from the viewpoint of four members of the Front de Liberation du Quebec. In the first scene, members of the FLQ are rapidly escaping after dumping the corpse of Pierre Laporte, Labor Minister, into their car trunk. Using flashback, the film chronicles the week prior to the murder including the actual kidnapping. Much of the action occurs in the bungalow to which to terrorists took LaPorte. There they must wrestle with the potential consequences of their actions. ~ Sandra Brennan, Rovi

There are no critic reviews yet for Octobre. Keep checking Rotten Tomatoes for updates!

Octobre is a film that recounts the October crisis of 1970. After The FLQ kidnapped a government official. Directed by Controversial French filmmaker Pierre Falardeau, this is a decent film that could have been much better than what it turned out to be. The performances are decent, however considering the subject this film could have been far better and it is a shame that the result is a somewhat lacking film that entertain, but is short of its potential. Pierre Falardeau is a filmmaker that doesn't know how to develop his story. Falardeau tries to construct an effective plot, but it ends up being a somewhat watchable film that has an interesting idea, but is underdeveloped due to a so-so script. Although it is not a memorable film, it does boast a few standout scenes, but as a whole, Octobre is one of those films that doesn't warrant multiple viewing. The cast do what they can with the material at hand, if only the direction would have been better. Falardeau is not a good filmmaker and his films suffer from really engaging, well structured plots. This was a dark period in Quebec history and it deserves to be told in a broader sense. As it is, it is a one dimensional film that only tells the story of the terrorist's point of view. It's an interesting aspect to watch how things unfold in the FLQ during the crisis, but Farlardeau just gives us part of the story, not the whole picture, which makes Octobre a decent, but very flawed film.