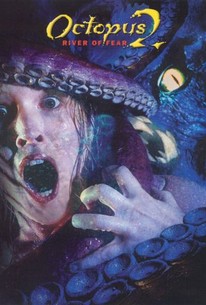 Somewhere under the murky waters of New York's East River is a very large, very hungry octopus that, under the cover of night, slides near the shore and along side unsuspecting small boats in order to drag human prey into its gaping maw. Few take the threat seriously, including the incredulous mayor (Duncan Fraser) who gives his dedicated assistant Rachel Songbird (Meredith Morton) a hard time for even suggesting the disappearances of several citizens have something to do with overgrown calamari. But when rookie SCUBA cop Nick Hartfeld (Michael Reilly Burke) loses his partner Walter (Frederic Lehne) to the squiggly creature, Hartfeld defies orders and goes after it fulltime. But can he save Rachel and a bus load of school children trapped in a tunnel under the river following an attack by a giant octopus?

Someone Still Continues to Know What You Did Several Summers Ago

There are no critic reviews yet for Octopus 2: River of Fear. Keep checking Rotten Tomatoes for updates!