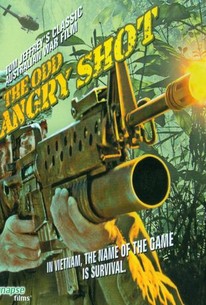 In The Odd Angry Shot director Tom Jeffrey provides a cathartic Australian answer to Michael Cimino's The Deer Hunter. Australia's participation in the Vietnam War was as much of an alienating and soul-searching experience for Australians as for Americans, and Jeffrey's frank portrayal of a group of Australian volunteers casts the war in a different light from the perspective of a Cimino or Oliver Stone. The story concerns a corp of Australian elite soldiers -- the Special Air Service troops (the equivalent of the United States' Special Forces group) -- and the elite group's more pragmatic and hopeful attitudes -- whiling away the time in mindless diversions and cracking jokes. Then one of their own is killed and their feelings about the war suddenly change. ~ Paul Brenner, Rovi

Brian Anderson
as Barman
View All

A flavorful movie with stout performances and a distinct cultural atmosphere to help it maneuver through a few passages of stagnant storytelling.

There are no featured audience reviews yet. Click the link below to see what others say about The Odd Angry Shot!