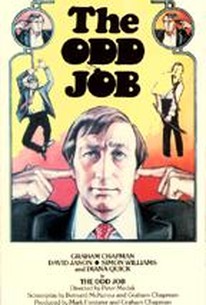 In this dark British comedy, a despondent businessman (Graham Chapman) decides to end it all after his wife leaves him. Unfortunately, he lacks the courage to do it to himself and so hires a professional assassin, telling him to do the deed no matter what. A short time passes and things look considerably brighter for the businessman who suddenly decides he wants to live. Unfortunately, nothing he says can convince his would be killer to stop his pursuit, and comic mayhem ensues. ~ Sandra Brennan, Rovi

Toby Salaman
as Barman
View All

There are no critic reviews yet for Odd Job. Keep checking Rotten Tomatoes for updates!

Basically the answer to a trivia question ("What did Graham Chapman do between 'Holy Grail' and 'Life of Brian'?"), "The Odd Job" is a slight black comedy that lacks the surreal absurdity and heady academia to match Monty Python's genius. But it's essential viewing for fans, all the same. Arthur Harris (Chapman) decides he can't go on after his bored wife (Diana Quick) leaves him, but is too cowardly to kill himself. A quirky fool (David Jason) seeking "odd jobs" knocks on the door at just the right moment, and Arthur hires him as a stalker/assassin. However, the wife soon returns and poor Arthur can't call off the pact. Thus begins a farce in which he scrambles to dodge a series of inept murder schemes. It's a one-joke plot, but the action turns dark enough to avoid being a Wile E. Coyote and Roadrunner cartoon. Meanwhile, Bill Paterson (who also appeared in Michael Palin's "A Private Function" and Terry Gilliam's "The Adventures of Baron Munchausen") shows up as a detective in his film debut, and slinky Carolyn Seymour accepts a throwaway role that requires little beyond gratuitous nudity. Director Peter Medak ("The Ruling Class," "A Day in the Death of Joe Egg") is no stranger to perversity, but this film is not his best work. But just imagine if the hit man had been played by the original casting choice: the Who's Keith Moon.