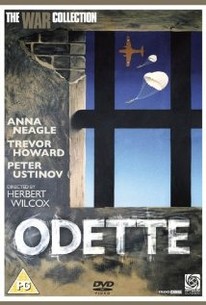 This espionage drama was based on the true story of Odette Sansom Churchill, who became an unlikely hero during WWII. Born in France, Odette (Anna Neagle) was married to an Englishman who died in battle. When the British Army made an appeal for photos of the French coastline, Odette mailed a set of old holiday snapshots to the War Office. As a result, Odette was approached to serve as a British agent in France during the Nazi occupation. Under the guidance of Capt. Peter Churchill (Trevor Howard) and French resistance soldier Arnaud (Peter Ustinov), Odette's ability to blend in as a typical French citizen was put to excellent use by Allied intelligence. Odette was eventually found out and subjected to brutal torture by Gestapo Col. Henri (Marius Goring), but she never gave up any information on her work. She was then sentenced to death in a concentration camp, and when American forces arrived to liberate the compound, Odette was held hostage by the camp's Commandant (Alfred Schieske), believing that she was too valuable to let go. Anna Neagle consulted with the real life Odette Sansom Peter Churchill (who married after the war) to prepare for her performance. ~ Mark Deming, Rovi

Maurice Buckmaster
as Himself

Derrick Penley
as Jules
View All

A beautiful restoration of a wonderful war film.

There are no featured reviews for Odette at this time.