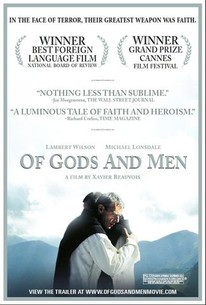 Critics Consensus: Patient and restrained, Of Gods and Men asks deep, profound questions that will linger in the audience's mind long after the movie.

Critics Consensus: Patient and restrained, Of Gods and Men asks deep, profound questions that will linger in the audience's mind long after the movie.

Critic Consensus: Patient and restrained, Of Gods and Men asks deep, profound questions that will linger in the audience's mind long after the movie.

Of Gods and Men Photos

Eight French Christian monks live in harmony with their Muslim brothers in a monastery perched in the mountains of North Africa in the 1990s. When a crew of foreign workers is massacred by an Islamic fundamentalist group, fear sweeps though the region. The army offers them protection, but the monks refuse. Should they leave? Despite the growing menace in their midst, they slowly realize that they have no choice but to stay... come what may. This film is loosely based on the life of the Cistercian monks of Tibhirine in Algeria, from 1993 until their kidnapping in 1996. -- (C) Sony Pictures Classics

Critic Reviews for Of Gods and Men

Alternately harrowing and humbling, this is a story of ordinary men whose compassion is tested in the cruelest, most profound fashion.

Beauvois takes his time limning the daily rhythms of the monastery, lingering on its most lyrical and sensuous moments, so that when violence finally reaches its gates the effect is all the more chilling.

I was stirred by the emotions expressed in this film-and the wonderful performances of its cast. Filmmaker Beauvois chose great faces, as well as great actors, to bring these characters to life, and they manage to convey an enormous amount with very...

The film, directed by Xavier Beauvois, moves back and forth between the monks doing their daily chores and the decisions they must face as a group.

There are numerous sequences of tremendous emotional power here, none more so than one in which the monks gather together to sing an ancient Gregorian chant as an Algerian Army helicopter gunship hovers threateningly overhead.

Forgive me, Father, for I was bored.

Examines the fragile yet luminous weaving together of God within the lives of humanity in a way that is at times painful, heartbreaking, inspiring, and awesome.

[A] meditative, serene film about faith and bravery.

Unlike most films where religion is portrayed as a dehumanizing or negative force, Beauvois makes it clear that he sees this band of monks in clearly humanistic terms.

Beauvois directs with a simple austerity, but one so rich with emotional and spiritual undertones that much of what the film is trying to say is conveyed without words.

The latest film by the French actor-turned-director Xavier Beauvois, Of Gods and Men won the Grand Prix at the 2010 Cannes Film Festival, and may be Beauvois' most accomplished work to date.

The film is a masterful exploration of belief in God and, perhaps more importantly, love.

Audience Reviews for Of Gods and Men

Knowing the premise, I expected a film about christian monks having to deal with an Islamic terrorist siege, discussions of faith and terror, but there is little of that. The film instead takes forever to introduce the monastery and the monks' connection to the local open minded Muslim community. The daily routine of praying, singing and working takes way too much space here, the film easily could have clocked in 20 minutes shorter and still gotten all its points across. When terror ultimately strikes on the monks it is only hinted at and ends in a walk into the mist. Of course you gotta appreciate the film not creating a sensationalist ending, but after the long set-up, the inevitable is still a let-down.

A wonderful and heartbreaking film that moved me to tears with a story (based on real events) that takes the necessary time with a deliberate pace to introduce us to each of the characters and their lives together, and make us truly care about them and their tense situation.

A group of Trappist monks must decide to flee or remain when a nearby village is threatened by Muslim extremists. As slow burns go, Of Gods and Men is one of the most compelling. Tightly scripted and slowly but tensely paced, as this story unfolds, the film's themes emerge subtly: the film portrays the austerity of faith and how faith leads to a sense of security and conviction. While I'm not personally committed to these theses, the film's portrayal is richly textured and compelling. By the end of the film, we get to know these monks about as well as we get to know anyone in an understated French film, and it's hard not to admire them. Overall, this is profound and compelling story well-told.

A slow and touching drama that looks at the true story of a group of monks who refuse to leave their monastery despite the danger they are faced with. This film skyrockets to levels of absolute perfection thanks to the way it handles religion on such a human level. The religious aspects are part of the characters, and not necessarily part of the film itself. Lambert Wilson is astonishing as the quiet but strong monk Christian, who must decide whether to stay and possibly die or leave and live. We are shown the true power of the human spirit without ever having to face over sentimental music or melodramatics. Every scene is handled with absolute faith in the cast and writing, as one scene tears us apart with tension, without needless editing nor a bombastic soundtrack. A gentle masterpiece.

Of Gods and Men Quotes