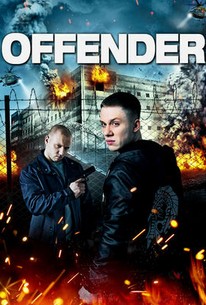 Hot new talent Joe Cole ignites a masterpiece of explosive intensity in this powerful action suspense thriller. For Tommy Nix, his girlfriend and unborn child were his entire life and his reason for living. That is until one cruel day when they were brutally torn away as the collateral damage for a ruthless gang who pulled off an armed robbery-murder during the chaos of the London riots. As the city swelters and burns around him Tommy is left with nothing but rage inside. Launching a one-man-war against those responsible he will stop at nothing, even incarceration, to deliver his own form of blazing justice. A man who has lost everything becomes capable of anything...

Waiting for Britain's answer to A Prophet, or an update of Scum? Keep waiting.

If 'Offender' has a point to make about the justice system, it fails to land the punch.

A solid revenge thriller in which Cole excels.

Featuring some enjoyable performances and an entertaining revenge plot, it still has just enough about it to keep audiences entertained.

It's the performances that really carry this film. Cole's intense portrayal marks him as one to watch and rapper English Frank also impresses as the prison's posturing, cod Jamaican kingpin Jake.

The detail is realistic and it's a decent enough genre piece.

An engaging, impressively staged revenge drama with a striking central performance from newcomer Joe Cole and a strong support cast ...

A spare script and lean dialogue lend genuine power to the taciturn youngster's unswervable quest for justice, a single-minded obsession that results in some truly bone-crunching violence.

Ron Scalpello's brutal debut about a young offenders' institution hammers its messages home with a sock full of snooker balls.

The way the camera lingers on the lividly bruised and battered faces of his characters, plus the clichéd use of slow motion, epitomise the film's limitations.

Offender was a good movie, possibly a great one, but I can't make that distinction, feeling like I missed a good portion of it. The story is solid and the acting is terrific, but Offender is a British film, and some of the accents were so thick, that I had a really hard time with the dialogue. The story centers on Tommy Nix (Joe Cole), a man on a mission, to avenge the savage beating of his wife, and the death of his unborn son. Tommy has a problem though, all the men responsible are already in jail. Acting on impulse, Tommy decides to get arrested, and sent to the same facility to enact his revenge. Being that this was a British film, I was not familiar with any of the actors, so I really didn't know what to expect. After seeing the film, I can tell you this much, remember the name Joe Cole, because this young man is destine for stardom. He gives one of the most powerful performances I've seen all year. Cole's performance is really what separates this film from similar stories. Tommy Nix was not a superhero, but what he has to endure at this strange prison, leading up to the exciting conclusion, was really something to see. Offender seemed to blend originality with several similar story lines. It's easy to see the influence of Payback, Oz (The TV Show), and Sleepers, while watching this movie. The writers took just enough to enhance the film, without making it seem like they were ripping anyone off. I really enjoyed Offender and it's star Joe Cole, but I feel as though the thick accents and mumbled dialogue took something away. As someone who isn't used to hearing it everyday, it made the film somewhat difficult to understand at times. It's still worth seeing, if only for Cole's performance. Maybe the next time I watch it I'll put on the closed captioning.

Offender was a raw, intense, violent film of revenge. I really liked it. Joe Cole plays Tommy Nix and he scary good in this. His quiet lethal demeanor really worked well for his character. When Tommy's girlfriend is brutally attacked and left for dead Tommy seeks revenge of the men that did it. But the men have been locked up for a different crime they had already done so Tommy does what he must to make sure he gets put right where they are. It's a great prison flick. I would definitely see it again.