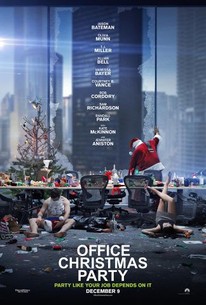 Critics Consensus: Its cast of gifted comics is good for a handful of laughs, but Office Christmas Party's overstuffed plot ultimately proves roughly as disappointing as its clichéd gags and forced sentimentality.

Critics Consensus: Its cast of gifted comics is good for a handful of laughs, but Office Christmas Party's overstuffed plot ultimately proves roughly as disappointing as its clichéd gags and forced sentimentality.

Critic Consensus: Its cast of gifted comics is good for a handful of laughs, but Office Christmas Party's overstuffed plot ultimately proves roughly as disappointing as its clichéd gags and forced sentimentality.

In OFFICE CHRISTMAS PARTY, when the CEO (Jennifer Aniston) tries to close her hard-partying brother's branch, he (T.J. Miller) and his Chief Technical Officer (Jason Bateman) must rally their co-workers and host an epic office Christmas party in an effort to impress a potential client and close a sale that will save their jobs. The latest comedy from directors Josh Gordon and Will Speck (BLADES OF GLORY) co-stars Kate McKinnon, Olivia Munn, Jillian Bell, Rob Corddry, Vanessa Bayer, Randall Park, Sam Richardson, Jamie Chung, and Courtney B. Vance in the funniest movie of the holiday season.

Courtney B. Vance
as Walter Davis

Karan Soni
as Nate
View All

19 Rotten Christmas Movies We Love
On DVD This Week: Rogue One: A Star Wars Story, Paterson, and More
Dave Chappelle Specials, Orphan Black, Train to Busan, and More on Netflix and Amazon Prime This Week

Maybe it's because of all the depressing news... or ... the holidays and we are in dire need to see something lighthearted and, frankly, stupid right now, but this is temporarily satisfying. I guess that's all we can ask for this moment.

A big waste of much top-flight talent.

The film, for all its failures, works as an effective catalogue of life in the modern-day office, an assortment of absurdities, fictions and religious rituals that we somehow mistook for normal.

Office Christmas Party is about going too far in order to close a deal, but the movie, curiously, still plays it way too safe.

The familiar dinguses can actually be quite entertaining.

Although sporadically very funny, this tale of an embattled business going all out on festivities in order to stay afloat is as predictable as Boxing Day indigestion.

There are laughs to be found.

[Office Christmas Party] doesn't bring much new to the table.

Office Christmas Party is about as sharp as a marble, but it has a sizable heart and more than a few big laughs thanks to an eclectic group of actors.

Office Christmas Party doesn't take chances, never swings for the fences, and will be forgotten in six months. But I laughed, a lot, and I walked out of the theater feeling good.

Office Christmas Party had some funny moments without being incredibly raunchy which is a nice change from the Sausage Party mentality.

A normal comedy, with little to differentiate it from tons of other riffs on The Hangover, merely to say its no total embarrassment, but neither is it a laff riot.

A mindless comedy that offers the same as any Christmas comedy movie. it's fun just leave it at that!

There is a very wide range between what makes a great comedy and what could make a terrible comedy. In my opinion, there are more mediocre comedies than anything, due to the fact that most films hit with a lot of jokes, but just as quickly fall flat. Office Christmas Party sadly falls right in line with those, but also manages to have quite a few laughs throughout. This is as generic as you can possibly get in terms of story, but the laughs are very present here and does warrant a viewing in the end. I am not going to go all out and praise this as one of the funniest movies I have seen in a while, because I would be lying, but it does have its share of laugh-out-loud gags. Here is my review of Office Christmas Party. Clay (T.J. Miller) and Carol (Jennifer Aniston) have lost their father. His company is passed onto them. She is thinning the branches out, threatening to close her brother's branch if he doesn't smarten it up. Throwing a company Christmas party in order to seal a new deal, hilarity ensues and Christmas miracles/cheer fills the air. It really is as simple as that. This is a film to kick back, crack open a beer, and just enjoy some nonsensical entertainment. Is it a bad film? Not by any means, but it really isn't that great either. The odd thing about this film is that I found it very funny, but I do not find myself remembering anything I laughed at in the years to come. I have to commend this film for having very well-timed jokes, having many people laugh throughout the screening I was in, as well as myself, but looking back on the film, there is nothing I can remember that would be worth quoting to someone that would get them into the theatre. That is this films biggest issue. There is nothing wrong with a simple generic tale told well, but the comedy needs to hit. For me, the comedy hit almost all the time, but I immediately forgot about each joke when the film progressed. These characters are developed enough to care about the conclusion of this film, but by the end of the film I felt like each of their characteristics were cranked up to a million. Although Christmas serves a purpose for the story here, I truly believe that this same premise could have worked as a regular party film. If this film was called Office Party instead of Office Christmas Party it wouldn't have sold as many tickets. The writers of this film cleverly incorporated Christmas into the mix, making for a film that will gains laughs around the holidays. The funny thing is that I believe this film could have worked both as a Christmas movie and as a regular party film, but the bigger Christmas released this year in Bad Santa 2 was much less funnier. For that, I commend Office Christmas Party. This is a decent throwaway film. In the end, Office Christmas Party is the type of movie that you put on with friends around the holidays when you can't find anything else to watch. You will laugh quite a few times throughout and then completely forget about it until the next time you happen to catch it. It is a film that has funnier side characters than the main cast and the hijynx they get into were some of the hi-lights of the film. For what it is, Office Christmas Party has a serviceable screenplay, solid direction, and a very likeable cast. There is nothing about this film that should turn anyone away, but it just plays it too safe. There are many laughs to be had, but nothing too memorable. Overall, Office Christmas Party is a forgettable good time that I recommend if you are not looking to be moved at the cinema this holiday season. It is a very easy watch.