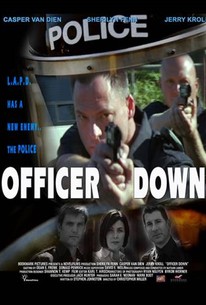 The son of a powerful police commissioner, uniformed officer Philip Gammon (Casper Van Dien) is secretly in charge of the Vigilantes, an illegal band of fellow cops whose mission in life is to track down and kill all known drug dealers. Inevitably, the Vigilantes become drunk with their own power, using their vendetta as an excuse to extort money from innocent bystanders, and to knock off anyone who learns too much about their covert operation. Rookie cop Kathryn Shaunessy (Sherilyn Fenn), herself the daughter of a legendary lawkeeper, gets wind of Gammon's activities and publicly exposes him and his cronies. Inevitably, the Vigilantes swear vengeance against Kathryn and her family -- and with so many corrupt cops on the force (not to mention a hostile public who thinks of the Vigilantes as folk heroes!), to whom can she turn for protection? Assassin in Blue was telecast on cable's Lifetime network as Officer Down on August 1, 2005.

Sherilyn Fenn
as Off. Kathryn Shaunessy

Nicole Kingston
as Off. Baron

Critic Reviews for Officer Down

There are no critic reviews yet for Officer Down. Keep checking Rotten Tomatoes for updates!

Audience Reviews for Officer Down

There are no featured audience reviews yet. Click the link below to see what others say about Officer Down!