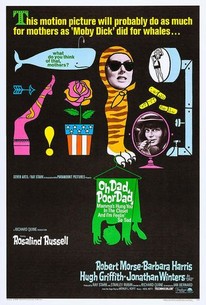 Oh Dad, Poor Dad, Mamma's Hung You in the Closet and I'm Feelin' So Sad Photos

A domineering mother and her sheltered son fly face first into love, murder, and the meaning of family in this black comedy based on Arthur Kopit's Broadway play. Wealthy Madame Rosepettle (Rosalind Russell) and 25-year-old Jonathan (Robert Morse) arrive at the Port Royal Hotel on a tiny Caribbean island with the man of the family in tow, literally; he's been dead for many years and his stuffed corpse travels with them in a coffin. Madame is the kind of woman who keeps piranhas and Venus Flytrap plants as pets, and controls her son's life down to deciding what meal he'll have for breakfast, lunch, and dinner (a hamburger and a maraschino cherry). Jonathan is kept indoors at all times and isn't allowed to mix with the outside world, though the hotel "babysitter," Rosalie (Barbara Harris), slips in through the window and flirts with the easily rattled young man. Madame is being courted by drunken millionaire Commodore Roseabove (Hugh Griffith), and while she welcomes his advances, her attention is diverted by trying to make sure that her son stays "pure." Rosalie isn't one to be put off by the meddling matriarch, so she doubles her efforts to get at Jonathan, who wants Rosalie too but might be pushed over the edge by the attention.

Janis Hansen
as The Other Woman

Critic Reviews for Oh Dad, Poor Dad, Mamma's Hung You in the Closet and I'm Feelin' So Sad

What was offered as theater of the absurd (it wasn't quite, really) on stage comes off as an absurd movie, on screen. It also is tasteless, witless, senseless and morbid.

Audience Reviews for Oh Dad, Poor Dad, Mamma's Hung You in the Closet and I'm Feelin' So Sad

Theatre of the absurd to the nth degree. The cast is game, the production design impressive and the costuming, especially for Roz, elaborate. What until you get a load of Miss Russell's ever changing wigs in various pastel colors, pink, golden and green among them. Oddball film is different, how much you like it depends on how game you are for outlandish cinema.

Oh Dad, Poor Dad, Mamma's Hung You in the Closet and I'm Feelin' So Sad Quotes