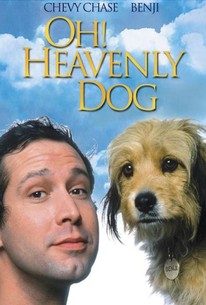 Any comedy should be suspect when the lead character, in this case Benjamin Browning, is played both by an actor (Chevy Chase) and a lovable dog (Benji). Private eye Browning is in London tracking down a sexual scandal in British political circles when he is murdered. His karma is canine in form and gets him rebirth as a dog. Fortunately for him, the dog's owner is Jackie Howard (Jane Seymour), a magazine reporter who does not realize that there is a rather lustful man inside her innocent pooch. Benji supplies the few moments of humor in this uneven film.

Benji
as Benjamin Browning, as a dog, Benji a.k.a Browning

David Samain
as Postie No. 1

Neil Affleck
as Postie No. 2

Jennifer Foote
as Lady with Dog

John Lefebvre
as Policeman
View All

Shows few signs of life, and many signs of depressing modernism.

It's a total miscalculation from beginning to end.

Chase plays a detective who gets killed and comes back to Earth as a dog to solve the crime he was working on. Usually movies where people turn into animals or something are stupid and unfunny, but there's a good amount of comedy in this movie. It's not great, but it's entertaining, and better than I expected.

Meh. A Chevy Chase vehicle and a Benji vehicle that pretty much fails all around.

A great concept of having a murdered detective come back to life as a dog to solve his own murder. There's enough romance and comedy to make for an enjoyable movie. The rainy London setting is wonderfully atmospheric and the ending is something special. I want to see it again soon.