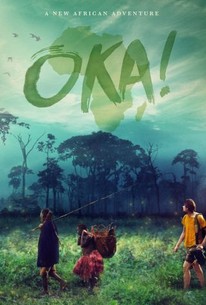 OKA! is a fish-out-of-water tale of a ethnomusicologist from New Jersey who finds himself immersed in the colorful lives of the Bayake pygmies. Based on the memoir by ethnomusicologist Louis Sarno, who has lived with the pygmies for over 20 years, OKA! transports audiences to the vast forest of the Central African Republic into the magical world of the Bayaka and lyrically captures their music, dance, humor and exuberance, as well as the harsh realities they endure. -- (C) DADA Films

Will Yun Lee
as Mr. Yi

Bayaka of Yandombe
View All

It's a pleasant, if slow-moving, trip down a lazy river.

The plot is somewhat pedestrian and the dialogue needs more zip.

The film somehow feels more fanciful than factual, a rift that's aggravated by the juxtaposition of the real actors' performances and the Bayaka pygmies' at times startling real presence.

Oka! is a fascinating movie with many free-form charms.

Yearning for an exciting African adventure? "Oka!" isn't it.

What's refreshing about Oka! is its aversion to any kind of cliches.

Despite some missteps and awkwardness, Oka! proves compelling and engaging. Currier captures the beauty of the African landscape, and she takes the time to document the Bayaka culture with care and compassion.

A unique and fascinating tale of cultural connection, and the elemental nature of various human curiosities that bind us together.

Slow to start and rambling when it gets going, Oka! nevertheless offers small pleasures, not least a glimpse of life deep in the African rainforest.

OKA!, like the mysterious horn the characters hunt, is a real find.

If only for its portrait of a land and a fascinating culture, "Oka!" is worth the journey.

Rather than idealize life in a state of nature, Oka! depicts Bayaka culture as messy and not always admirable, but exuberantly vital.

There are no featured audience reviews yet. Click the link below to see what others say about OKA!!