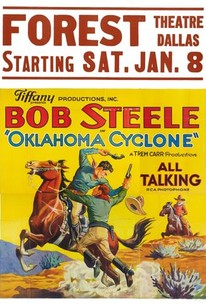 Disguising himself as a bandit, diminutive cowboy star Bob Steele infiltrates the gang who abducted his father, the sheriff. The second of eight Steele Westerns produced by Trem Carr for Tiffany release, this minor Western included three songs crooned by a star not necessarily known for any great vocal abilities. With non-vocalists like Steele and fellow Tiffany star Ken Maynard constantly warbling by the camp fire, it is a wonder that their Westerns remained the floundering company's only real moneymakers. The singing cowboy vogue had come to an end by 1931 and (thankfully, some say) was not revived until the emergence in the mid-'30s of radio crooner Gene Autry.

Hector V. Sarno
as The Don

There are no critic reviews yet for Oklahoma Cyclone. Keep checking Rotten Tomatoes for updates!

There are no featured reviews for Oklahoma Cyclone at this time.