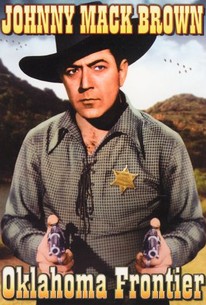 Oklahoma Frontier was Johnny Mack Brown's second starring western for Universal. On the eve of his honeymoon with new bride Janet Rankin (Anne Gwynne), homesteader Jeff McLeod (Brown) is thrown into jail at the behest of villain George Frazier (James Blaine). It takes some doing, but McLeod finally manages to elude his captors, reclaim his land and find lasting happiness with his missus. Universal's resident singing cowboy Bob Baker is cast as Janet's brother, who is killed off halfway through the picture-warning enough to Baker that his days as a film star were numbered. Writer/director Ford Beebe keeps Oklahoma Frontier constantly on the move, seldom letting the actors-or the audience-catch their breath.

Tom Smith
as Settler
View All

There are no critic reviews yet for Oklahoma Frontier. Keep checking Rotten Tomatoes for updates!

There are no featured reviews for Oklahoma Frontier at this time.