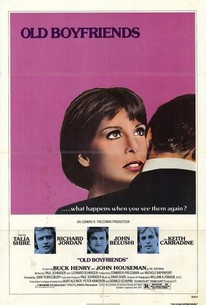 Noted screenwriter Joan Tewksbury made her directorial debut with this bittersweet comedy-drama. Diane Cruise (Talia Shire), a psychologist going through a severe depression, takes a long look at her life after attempting to commit suicide. Diane decides to pay a visit to her former boyfriends in order to get in touch with her past and map out her future. She meets up with her high school sweetheart Eric Katz (John Belushi) and gets to turn the tables on him in revenge over a past humiliation. She also finds Jeff Turrin (Richard Jordan), her college beau who now works as a filmmaker, and she discovers that the first boy she fell in love with has died -- only to find herself drifting into an unexpected romance with his older brother, Wayne Van Til (Keith Carradine). The supporting cast features John Houseman, Buck Henry, Gerritt Graham, and P.J. Soles.

Keith Carradine
as Wayne Van Til

Gerrit Graham
as Sam The Fisherman

Bethel Leslie
as Mrs. Van Til

Diane bears all the outward signs of a contemporary heroine (autonomous working woman setting out alone on existential quest), she defines herself and is in turn defined exclusively through her relationships with men.

I find Tewkesbury's restraint more interesting, as it results in something hazily impenetrable and truer to the often ambiguous nature of people's thoughts and motivations.

Tewkesbury evokes a Hitchcockian depth of subjectivity in what is essentially a first-person survey of women's hidden terrors.

A protege of Robert Altman, novice director Joan Tewkesbury, who scripted his Nashville, employs similar loosely narrative techniques, with the Shire character holding together the series of set pieces.

The failure owes something to slack direction, and probably more to the misogyny of Paul and Leonard Schrader's script, which contrives a distinctly reactionary mix of sentiment, morality, and melodrama.

The performers... invest much more of themselves in the film than it ever returns to them.

The film treads too softly and ignores pointed observation by sweeping Shire's character's major depression under the proverbial rug, and the performances and mise en scene in this movie don't exactly enthrall.

While the story is technically about old boyfriends, Old Boyfriends is more interested in examining who Diane is without them.

Shire is as funny and charming as she is melancholy, and equal parts moving yet frustrating as Dianne Cruise.

It's a meandering curio, driven by the enigma of what propels Dianne and the question of what is true and real, all underscored by an eerily aloof narration from a Diane some years down the line, voicing over with mordant lines plucked from diary entries.

Tewkesbury has absorbed much of Altman's ability to capture spontaneity, but none of his genius for telling a good story.

There are no featured reviews for Old Boyfriends at this time.