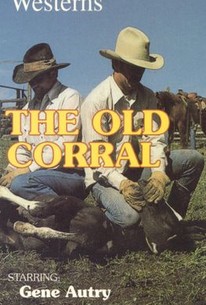 A typical Gene Autry everything-but-the-kitchen-sink music Western, The Old Corral features the spectacle of Autry getting robbed at gunpoint by his future rival, Roy Rogers. Rogers, who was then known as Dick Weston, and his fellow highwaymen (the singing group The Sons of the Pioneers) go about their illegal activities like true gentlemen, of course, refusing to rob female passengers Nora Cecil and Hope Manning. The latter, playing Eleanor Spencer, is wanted by both the authorities and the Chicago mob after witnessing gangster Mike Scarlotti (John Bradford) murder rival Tony Pearl (Buddy Roosevelt). En route to Los Angeles by Greyhound Bus, she hooks up with small-town saloon owner Martin Simms (Cornelius Keefe), a slick type who offers her a job singing in his Turquoise City establishment. Both Simms and Turquoise City sheriff Gene Autry, however, recognize Eleanor as the key witness in the Pearl murder case and the former is quick to notify Scarlotti. Arriving to silence the girl for good, the Chicago mobsters are met by Sheriff Autry, Deputy Frog Millhouse (Smiley Burnette) and their erstwhile prisoners, the O'Keefe brothers (Rogers, Bob Nolan and The Sons of the Pioneers), the brothers taking a break from harmonizing in their cell. The outcome, of course, is a given and the entire gang is soon behind bars.

Sons of the Pioneers
as O'Keefe Bros.

Sons of the Pioneers with Roy Rogers
as Themselves

Critic Reviews for The Old Corral

It works as a B Western, where expectations are lowered.

There are no featured reviews for The Old Corral at this time.