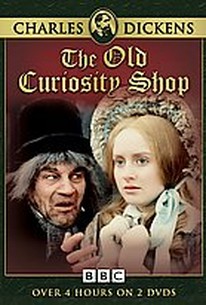 Previously adapted for British television in 1962, Charles Dickens' novel The Old Curiosity Shop was given the BBC miniseries treatment a second time beginning December 9, 1979. On this occasion, Natalie Ogle starred as Little Nell, resourceful granddaughter of an elderly shopkeeper (Sebastian Shaw) addicted to gambling. Despite the formidable villainy of malevolent dwarf Daniel Quilp (Trevor Peacock), Nell struggled valiantly to save the shop from passing into other hands -- and to save her grandfather from himself. Wisely, this adaptation retained the tragic ending that stirred up a storm of controversy when the novel was originally published. The Old Curiosity Shop ran for nine half-hour episodes. ~ Hal Erickson, Rovi

There are no critic reviews yet for Old Curiosity Shop. Keep checking Rotten Tomatoes for updates!

There are no featured reviews for Old Curiosity Shop at this time.