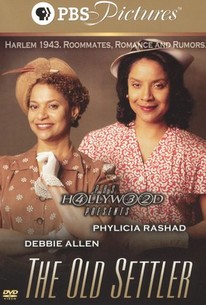 The Harlem Renaissance of the 1940s serves as the backdrop for this small-screen adaptation of John Henry Redwood's play as directed by Debbie Allen. The aptly-named Husband (Bumper Robinson) has come to New York City from down South to find his old flame Lou Bessie (Crystal R. Fox), who has thrown off the shackles of her old life in favor of the pace and excitement of the city. Needing a place to stay, Husband boards with Elizabeth (Phylicia Rashad) and Quilly (Allen), two sisters from the South with family trauma in their past. As he realizes that Lou Bessie no longer has any use for her old life, Husband starts up a May-December romance with Elizabeth, much to the consternation of Quilly. The Old Settler was brought to director Allen's attention by her sister Rashad, who optioned the play and signed on as executive producer. It premiered as part of PBS' Hollywood Presents series in 2001.

Critic Reviews for The Old Settler

Old Settler is a decent work, but certainly not an exciting one; it's pretty stodgy and soapish, a quality that's heightened by the limited production values.

Audience Reviews for The Old Settler

It was really good, pretty much exactly like the play. They didn't really take any liberties with the play to make it more "interesting" and I like that.