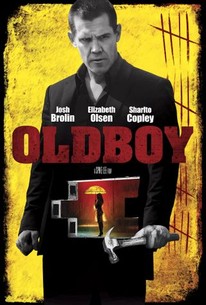 Critics Consensus: Suitably grim and bloody yet disappointingly safe and shallow, Spike Lee's Oldboy remake neither surpasses the original nor adds anything new to its impressive legacy.

Critics Consensus: Suitably grim and bloody yet disappointingly safe and shallow, Spike Lee's Oldboy remake neither surpasses the original nor adds anything new to its impressive legacy.

Critic Consensus: Suitably grim and bloody yet disappointingly safe and shallow, Spike Lee's Oldboy remake neither surpasses the original nor adds anything new to its impressive legacy.

OLDBOY is a provocative, visceral thriller that follows the story of Joe Doucette, a man who is abruptly kidnapped and held hostage for 20 years in solitary confinement, for no apparent reason. When he is suddenly released without explanation, he begins an obsessive mission to find out who imprisoned him, only to discover that the real mystery is why he was set free. Co-starring Elizabeth Olsen and Sharlto Copley, OLDBOY was directed by Spike Lee, from a script by Mark Protosevich (I Am Legend, The Cell, Thor). The film was produced by Roy Lee, Doug Davison and Nathan Kahane. (c) FilmDistrict

Taryn Terrell
as Girl In Park

Giovanni Anthony Silva
as The Checkpoint

The first hour or so of Lee's 'Oldboy' is so gripping that it's dispiriting to watch the wheels fall off the wagon so spectacularly in the third act.

Everything is wrong with [Spike] Lee's version of Park Chan-wook's notorious, super-violent super-action-thriller. For one thing, it's far from super. Not the quality, per se (although, for Lee, that's off, too), but the energy.

Viewers new to Oldboy will appreciate Lee's affecting and entertaining tale of a man unjustly imprisoned. Fans of Park's film-and there are many wildly loyal ones-will likely be far less impressed.

Other than catering to an audience unwilling to read subtitles, it's hard to see what Spike Lee has brought to the table ...

The facsimile is pointless but dependable until Lee and his screenwriter add increasingly ludicrous embellishments.

As a collection of red herrings and mumbo jumbo about "faceless corporations" it's an incoherent mess of information searching for a form.

The film seems largely an excuse to redo sensational sequences from the original.

What 'Oldboy' leaves is the clear feeling of wasting time when what we should have done is to watch again, for the umpteenth time, the modern classic that is the Korean film. [Full Review in Spanish]

It's an enjoyable work of its own, less hyper stylized, with certain changes that make it more viciously pulpy and, surprisingly, seedier.

Spike Lee scrambles Chan-wook Park's story in a perfunctory attempt to be original, but too much is lifted from its famous Asian counterpart.

The unraveling and ending of this who-and-why dunnit mystery is crazily twisted and a double blow to the gut.

The remake of the Korean mind fuck does not shy away from most of the unpleasant aspects of the original, but it's a leaner, less detailed version, which makes it somewhat easier to stomach. The result is sometimes unintentionally funny, sometimes brutal, but the mystery is engaging and the movie entertaining enough. In other words: if you know the original, you won't need this. If you don't, this might very well blow your mind.

Watched half. It's crap. Watch the original Korean version instead.

I haven't seen the Korean original, but what I saw here was a plot driven sonuvagun that takes no prisoners (whatever fans of the original might spout). Josh Brolin is the best I've ever seen him in this tale of revenge, and revenge again, that's rough to watch unless you were born in a prison, and maybe even if you were. Sharlto Copley is making a career playing bad guys, but at least this one has a rationale going for him which is well played. And Samuel L. Jackson ... what need be said?

Josh Brolin is an extremely bad choice for the role of the protagonist. Besides, the execution is too weak, and is bound to disappoint regardless of having already watched the original or not.