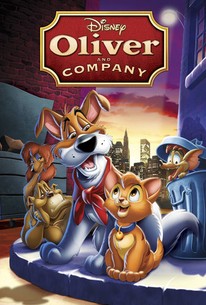 Critics Consensus: Predictable and stodgy, Oliver & Company isn't one of Disney's best, though its colorful cast of characters may be enough to entertain young viewers looking for a little adventure.

Critics Consensus: Predictable and stodgy, Oliver & Company isn't one of Disney's best, though its colorful cast of characters may be enough to entertain young viewers looking for a little adventure.

Critic Consensus: Predictable and stodgy, Oliver & Company isn't one of Disney's best, though its colorful cast of characters may be enough to entertain young viewers looking for a little adventure.

This animated musical retells Dickens's Oliver Twist amongst animals in New York City, with Oliver as an innocent kitten who joins a gang of law-breaking dogs. When Oliver is adopted by a wealthy young woman, the gang's evil human owner hatches a kidnapping scheme to tap into the girl's fortune.

William Glover
as Winston
View All

The cartoon action will delight young children, while older ones, who usually reject animation as "kid stuff," will enjoy the rock songs and hip characters, especially the brash Tito.

[T]he first animated feature from the new Disney studio regime, which is promising one such picture each year. Their first effort, measured against the Disney legacy of classics, is not up to the highest standard.

In any case, the movie is enjoyable, if not especially memorable.

Oliver & Company is Dickens with a twist, and Disney with a treat.

With its captivating characters, sprightly songs and zap-happy animation, Oliver & Company adds up to a tip-top frolic.

Even if the mismatched singing and dancing weren't overly annoying, the character designs and plot are noticeably mediocre for the Disney standard.

Oliver & Company is, from start to finish, a joyride that's up there with the best Disney movies of all time.

I was entertained. The music is great. However, sections drag and there are too many bland characters.

A film packed with superb animation, songs and a nifty story line. And it's all set to a cadence of love, laced with some danger.

There are some exciting sequences, but the picture ranks far below classic animal-toons like Lady and the Tramp and 101 Dalmatians.

A harmless modern retelling of Dickens' story with the setting shifted to late 1980s New York City and not a glimpse of the social commentary found in the novel, and it relies too much on its street smart charm and is toned down to be no more than just a fleeting pastime.

Unoriginal and boring alot, but most of the times it can be charming and good for kids.

Most people think Disney didn't have any good movies in the 80s, but hey, this was a good movie! It's got a lot of good songs, good actors doing the voices, and a nice story. I highly recommend it.