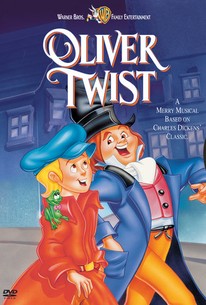 Oliver Twist is an animated version of the Dickens classic. Josh Albee is heard as the voice of the orphaned Oliver, while radio veteran Les Tremayne invokes all the tricks of his trade to portray the underhanded Fagin. This adaptation was a rare theatrical release from the TV-cartoon factory of Filmation; it was picked up for distribution by Warner Bros., who virtually threw away the film when it performed poorly in previews. Oliver Twist gained its widest exposure when it was telecast as an NBC special in 1981. At that time, the film's already heavily telescoped continuity was whittled down to an adumbrated 47 minutes.

Davy Jones
as The Artful Dodger

There are no critic reviews yet for Oliver Twist. Keep checking Rotten Tomatoes for updates!

Timid adaptation of the Dickensian environment,children will be fond of this au contraire to the grown ups who will discover the "undercover" gimmicks of the project,poverty symbols in other words.It's not worthless but even Disney's medieval times back in the 70's weren't so mushy.