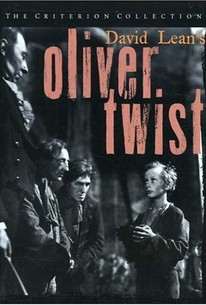 The second of director David Lean's adaptations of a Charles Dickens novel (Great Expectations (1946) was the first), Oliver Twist expertly boils down an enormous novel to a little less than two hours' screen time. The film begins with baby Oliver left on the doorstep of an orphanage/workhouse by his unwed mother. Proving a difficult charge to the wicked orphanage official, Oliver (John Howard Davies) is sold into a job as an undertaker's apprentice. He runs away and joins a gang of larcenous street urchins, led by master pickpocket Fagin (Alec Guinness). Oliver is rescued from this life by the kindly Mr. Brownlow (Henry Stephenson); but, with the complicity of evil Bill Sikes (Robert Newton), Fagin abducts Oliver. Sikes' girl friend Nancy (Kay Walsh) restores Oliver to Brownlow, leading to tragic consequences before an ultimately happy ending. Oliver Twist was filmed in England in 1948, but its American release was held up for three years due to the allegedly anti-Semitic portrayal of the duplicitous Fagin. Even in its currently censored form, Oliver Twist is one the best-ever film versions of a Dickens novel. It served as a blueprint for Oliver! (1968), the Oscar-winning musical version. ~ Hal Erickson, Rovi

Maurice Denham
as Chief of Police

Ivor Barnard
as Chairman of the Board

When Lean does subjugate his ego to Dickens's genius, this becomes a powerful study of depravity, misery and cruelty...

Alec Guinness as the master pickpocket Fagin is the high point of David Lean's 1948 version of the Dickens classic.

From every angle this is a superb achievement.

It is safe to proclaim that it is merely a superb piece of motion picture art and, beyond doubt, one of the finest screen translations of a literary classic ever made.

But what we remember from this tale...beautifully rendered in one of the loveliest black and white films ever here... is a little boy asking the one unforgivable request during one malnourished meal. "Please sir, can I have some more?"

The objectivity and realism of the film medium can scarcely do justice to the glow of Dickens's imagination... Within these limits, however, it is a painstaking and faithful version of the original which will be generally enjoyed and appreciated.

The film is worth seeing for Guy Green's lustrous photography and David Lean's peerless image-making.

Cruelty and murder in Dickens tale of orphan boy.

It's Lean's direction that makes the production really pop. It's relentless, but fluid and deft, keeping us on our toes rather than wallowing in misery.

David Lean does Dickens like no other. Absolutely superb.

Beautiful and unrivaled adaptation of Oliver Twist. No amount of Food, Glorious Food is going to lay this gem to rest. Lean creates a visual masterpiece evident within the first couple of minutes, a dark and brooding storm that is reminiscent of many works of German expressionism. Dialogue is used only when absolutely necessary making it a perfect cinematic piece. The performances are incredible from everybody. Newton gives a more subtle than some rendition of Sykes. Though still menacing his reaction after Nancy's death is pure unbelievable emotion. He's not just some cold bastard, but a man with serious anger issues. He's almost sympathetic. Guinness is brilliant as always, devious yet caring. Davies as Twist is another piece of inspired casting. He has the right melancholy face for the role and his angry outburst is almost reminiscent of Sykes', drawing a parallel and causing us to wonder what he would be capable of if he was older/bigger. The best performance though is by the dog that plays Bullseye. Watching him shake after Nancy's murder, and his begrudging advance towards Sykes as he plans on drowning him beg the question "how did they achieve that". The dog has an emotional range in his face lacking in many actors of today. The sets and backdrops of London and also the costumes complete a perfectly realised and realistic Dickensian London. One of the best adaptations you could possibly wish for.

David Lean makes the depression look fun compared to this.