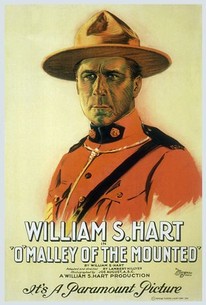 The great silent western hero William S. Hart was no longer in his prime when he produced (for Paramount-Artcraft) this moralistic tale of a Mountie chasing down the murderer of a saloon keeper. Along the way, the lawman encounters a gang of robbers and, to gain their confidence, pretends to rob a bank himself. The ruse works, and he is admitted to the gang's mountain lair. There, he falls for the sister (Eva Novak) of one of the bandits (Antrim Short). A jealous rival (Leo Willis) gets wise to the ruse, however, and the Mountie is sentenced to be hanged by the gang leader. He is rescued, in the nick of time by the girl and her brother. As it turns out, the boy is the wanted killer of the saloon keeper. Rather than arrest the brother of his beloved, officer Hart nobly resigns from the force, returning, as an inter title explains, " to his loved one no longer O'Malley of the Mounted." In accordance with changing tastes, the usually reticent Hart added several scenes of rodeo excitement to this otherwise average potboiler. ~ Hans J. Wollstein, Rovi

Bert Sprotte
as The Sheriff

Critic Reviews for O'Malley of the Mounted

Once more long, lean, keen-eyed Bill Hart takes to the saddle and the trail in a tale of bad men and good riders.

It is an excellent picture, perfect in every detail, but there are no surprises in it.

There are no featured reviews for O'Malley of the Mounted at this time.

O'Malley of the Mounted Quotes