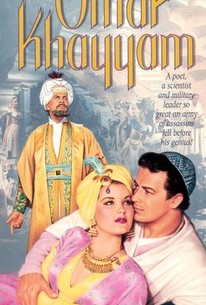 Frank Freeman Jr., son of the longtime head of Paramount Pictures, made his debut as producer with the opulent but empty Omar Khayyam. Cornel Wilde stars as the legendary Persian poet, here depicted as not only a philosopher but a scientist, politician and great lover. As the Persians gear up for war against the Byzantines, Omar occupies his time by romancing Sharain (Debra Paget), the favorite wife of the Shah (Raymond Massey). He also does his best to foil a plan by Hasani (Michael Rennie), leader of the Cult of Assassins, to murder the royal family. While many of the characters and events are based on fact, it is difficult to believe the story or the dialogue for more than ten minutes at a stretch. Singer Yma Sumac, then famous for her four-and-a-half octave vocal range, is somehow woven into the proceedings. When Omar Khayyam laid an egg at the box-office, a Hollywood wit, taking into consideration the Southern heritage of Frank Freeman Jr., assessed the results as "A loaf of bread, a bottle of coke and you-all."

Raymond Massey
as The Shah

Paul Picerni
as Commander
View All

A spectacular but slow and ponderous sword-opera which dramatizes the life story of the eleventh-century Persian poet-mathematician.

What I liked about it, is that it stunk but its smell wasn't that bad.