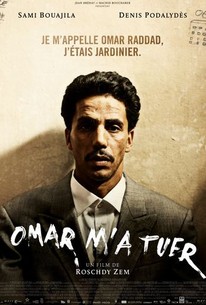 An unjustly convicted man fights for justice in this drama based on a true story. Omar Raddad (Sami Bouajila) had worked for years as a gardener for Ghislaine Marchal (Liliane Nataf), an elderly woman living in the South of France. In the summer of 1991, Marchal was founded murdered in the basement of her home, with the message "Omar M'a Tuer" -- literally "Omar Has Kill Me" -- written in her own blood on the wall. Raddad quickly became the prime suspect, even though he had a viable alibi, and he was convicted and sent to prison. However, a journalist covering the case, Pierre-Emmanuel Vaugrenard (Denis Podalydes), had a hard time believing Marchal would scrawl a message about her killer with her last ounce of strength, particularly one that was grammatically incorrect, and he began investigating the case, firm in his belief that Raddad was a victim of racism while the real killer had escaped justice. Directed by Roschdy Zem, Omar M'a Tuer (aka Omar Killed Me) received its North American premiere at the 2011 Toronto International Film Festival.

Critic Reviews for Omar Killed Me

The adherence to a Grisham-like structure all but kills the film's chances of leaving a lasting impression.

The film carefully develops the details of the highly publicized 1990 case in which a Moroccan immigrant was railroaded to prison.

Despite featuring lots of talking, Omar Killed Me never gets talky. Instead, it simply plays out like a compelling murder mystery.

Audience Reviews for Omar Killed Me

There are no featured audience reviews yet. Click the link below to see what others say about Omar Killed Me!