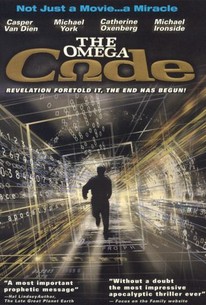 In this spiritual thriller, an ancient prophecy is about to be fulfilled as a secret code brings the world to the edge of Apocalypse. Gillen Lane (Casper Van Dien) is a expert on theology and mythology who has gained international fame as a motivational speaker. Lane is approached by Stone Alexander (Michael York), the owner and founder of a major media empire, who has been made chairman of the European Union and needs someone to help spread the word about his goal of a world united behind a single vision of peace. Lane begins to realize that there's something sinister behind Alexander's veneer of charity and benevolence: a secret code was embedded in the original texts of the Torah that will allow the person who cracks it to unlock the secret powers of the Christian scriptures; if it falls into the wrong hands, it could mean the end of Man's Reign on Earth. After the death of his mother, Lane lost his faith in God and embraced a New Age philosophy, but now he must confront his lost faith as he tries to discover both the all-powerful secret of the Omega Code and his own true identity. The Omega Code also stars Van Dien's wife Catherine Oxenberg as Cassandra Barris, a reporter working for Alexander's network, and Michael Ironside as Dominic, Alexander's thuggish underling. The Omega Code was produced in association with the Trinity Broadcasting Network, America's largest Christian broadcasting outlet.

Jan Triska
as Prophet One

Yehuda Efroni
as Rostenberg
View All

Critic Reviews for The Omega Code

After a promising start, Omega Code devolves into chase after chase, cliche after cliche, until you've finally forgotten just what it is that darn old code's supposed to do in the first place.

While The Omega Code is occasionally lacking in the techno-wizardry so common in similar films it makes up for it with a good plot.

Forgive them, Father, they know not what they do.

Neither smart and provocative enough to inspire serious religious debate nor amateurish enough to qualify as good schlock.

The story is dumb. The actors are dumb. Even the special effects are dumb. But not half as dumb as you'll feel if you pay to get in.

With a better direction, casting and some rewriting, this film could have been a lot better.

Michael Ironside dresses up as a rabbi and...ha...hahaha...excuse me.

I'm all for family-friendly entertainment with a minimum of sex, violence, and foul language -- that is, when done right.

Audience Reviews for The Omega Code

There are no featured audience reviews yet. Click the link below to see what others say about The Omega Code!