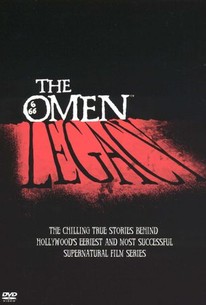 From the makers of The Alien Saga comes The Omen Legacy, an AMC documentary covering all four films in the thrilling series on the coming of the antichrist. The special follows the filmmakers as they break box-office figures with the first film, only to see each one after become more commercially and creatively stunted (the nail in the coffin being the fourth made-for-television Omen IV: The Awakening). Featuring interviews with director Richard Donner, producer Harvey Bernhard, and writer David Seltzer, among others, Legacy offers theological dissections of the series biblical groundwork, along with rare behind-the-scenes stories of the infamous Omen "curse." Included are most of the graphic, visceral kills from each film, making it also a breezy best of for fans of the more grisly scenes.

Critic Reviews for The Omen Legacy

There are no critic reviews yet for The Omen Legacy. Keep checking Rotten Tomatoes for updates!

Audience Reviews for The Omen Legacy