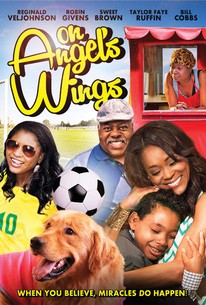 Young water girl McKenzie (Taylor Fyfe Ruffin) realizes her dream of playing soccer when the coach (Reginald Vel Johnson) makes her a substitute for the team's injured star player. Though a mishap in front of the entire school leaves McKenzie a social pariah, good fortune shines on the girl when an angel grants her three wishes. Excited, McKenzie shares the amazing news with her little brother, who joins her on a big adventure along with their dog Sam. Later, when McKenzie's wishes run out, she must learn how to become a success without the magic of angels on her side.

Critic Reviews for On Angel's Wings

There are no critic reviews yet for On Angel's Wings. Keep checking Rotten Tomatoes for updates!

There are no featured reviews for On Angel's Wings at this time.