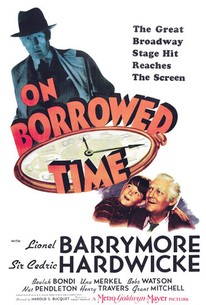 Old Gramps (Lionel Barrymore) is not about to go gentle into that good night when Mr. Brink (Cedric Hardwicke), who sometimes travels under the name of the Grim Reaper, comes calling. Through a ruse, Gramps chases Brink up a tree in his garden, rendering the mysterious stranger helpless. As a result, no one dies throughout the world, and disease and misery runs rampant. Dispassionately, Mr. Brink decides to "reach" Gramps through his beloved grandson (Bobs Watson). He talks the boy into climbing the tree and then suffering a crippling fall. Realizing that the only way he can stem his grandson's pain is by surrendering to Mr. Brink, Gramps does so--and discovers that Crossing Over wasn't as painful as he thought. Together with his grandson, who has likewise expired, Gramps joyfully strolls into a most pastoral-looking Heaven. The final shots of Lionel Barrymore walking into Paradise under his own power represent a triumph of misdirection and special effects. In truth, the wheelchair-confined Barrymore was placed on a treadmill, and merely simulated his walking movements as a process screen enhanced the illusion; for long shots, a double was used. While Barrymore's performance naturally dominates On Borrowed Time, Cedric Hardwicke is equally effective in the role of Mr. Brink (his favorite role). A great early vignette finds a consumptive motorist (Hans Conried) offering Brink a lift; the latter waves the motorist on, politely saying "No, not yet." On Borrowed Time was based on the novel by Lawrence Edward Watkin and the popular Broadway play version by Paul Osborne.

Critic Reviews for On Borrowed Time

There are no critic reviews yet for On Borrowed Time. Keep checking Rotten Tomatoes for updates!

Audience Reviews for On Borrowed Time

There are no featured audience reviews yet. Click the link below to see what others say about On Borrowed Time!