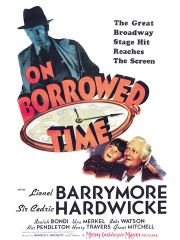 Scott R
½ December 12, 2016
An interesting story about trying to cheat the grim reaper.

Wilson T
½ July 31, 2013
When I sat down to watch this film, I had every expectation that with the exception of a few well-placed, well-delivered lines coming from Mr. Barrymore, it would simply be 99 minutes of my life gone forever with absolutely nothing having been gained or benefited by its viewing. How wrong I was.

A big thumbs up to "On Borrowed Time". Though the film was made nearly 3/4 of a century ago, it held up. From the very beginning, the appearance on screen of a "Foreword", so lost today but so expected of a generation raised on books and classic literature, immediately alerts the viewer that something of significance is about to follow. Where else might one ever hope to see the word like "perchance" on screen except in a great old film?

The sudden appearance of Mr. Brink, ably played by Cedric Hardwicke, surrounded by shadowy trees and shot in such a way as to frame these early shots in darkness, was yet sprinkled with a dark humor, most notably the coughing young Samaritan who stopped to help but was not being signaled "quite yet".

The introduction of Demetria played by Eily Maylon, seemed at first tragic and sympathetic. But "Aunt Demi's" true nature was soon revealed when at the news of the sudden death of her sister her sorrow seemed mostly driven by the loss of a promised trip to California.

I was right about one thing prior to seeing the film, Lionel Barrymore's well-placed, well-delivered lines. Even here though I was wrong about there being a few. His performance was stellar throughout. He delivered a Julian Northrup, aka Gramps, who could easily have come off as a cliché or caricature in the hands of a lesser actor. Barrymore made him real. Barrymore's Gramps was curmudgeonly, funny, serious, rude, sensitive, aloof and caring, often all within a single scene.

Add to the overall solid acting a storyline that carried us easily along the way, and even threw in a bit of a twist. It was completely obvious to me that young Marcia Giler would end up with Pud and that she, her beau and young Pud would inherit the place and live happily ever after enjoying that hammock Gramps mentioned.

Instead (Spoiler Alert) -- almost all of the good folks die! What kind of a happy ending is that? I'll tell you, it's a great one.

Part of me wants to scour the internet and find someone's production of Paul Osborn's original screenplay on stage just as it was written. Yet still, a bigger part of me says if it ain't broke, don't fix it.

Duane B
January 3, 2011
Interesting movie that has been largely ignored or forgotten.

Greg H
October 22, 2010
One of my favorites. A tender relationship between Gramps and Pud.

Christina S
½ July 20, 2010
Very good movie. I can see some bastard in Hollywood picking this movie up and thinking how great it would be to have it remade into a horror flick. Gramps will be a crazy neurotic old man that's obsessed with the paranormal, pud will be some EMO played by a teen and Mr. Brink will be played by some British actor who in the most climactic scene in the remake where he'll attempt to lure Pud's girlfriend into taking his hands, he'll reveal his true death form. Aunt Demitria will be changed to some random male relative who in the end gets pulled into the pit of hell opened by Mr. Brink when Pud uses a weapon that his crazy grandpa gave his towards the end before he's killed to use against Brink without touching him but in the end while trying ti get rid death, he himself get's killed. The ending will be him hearing his grandpa, grandma and girlfriend happily calling for him in a peaceful scenario rather like the conclusion of Nightmare on Elm Street, only to find out that they are all hideously mutilated, they melt into a bloody gory pile, Pud screams, the camera zooms out to reveal the peaceful land he found himself in has now transformed into the burning pit of hell, then the credits role, complimented by heavy metal. We will sit there thinking "wow, what a shitty remake of such a heartfelt film filled with characters that you will never see in any Hollywood film today." Pshhh...

Of course now that I think about it, it does seem a bit morbid that the only solution to the problem of this film, who will take care of little Pud was resolved by Mr. Brink taking both their lives so they can be together forever since Julian seriously didn't want his grandson being raised into a pussy by his aunt.

SV G
May 23, 2010
Wonderful old classic starring Lionel Barrymore about an old man who has tricked death by the name of Mr. Brink...as in "brink of time" (played by Cedrick Hardwicke) up his beloved apple tree and kept him there,so that he can remain on earth to raise his orphaned grandson. Fine performances and a memorable sentimental story with a timeless message. Enjoyed this very much.

James H
½ March 25, 2010
What a fascinating storyline, as only MGM could do it. The cast is fabulous. Lionel Barrymore, Beulah Bondi and Una Merkel all excel. Cedric Hardwicke is very memorable. The writing is excellent, so imaginative and different. Quite unforgettable.

James H
½ March 25, 2010
78/100. What a fascinating storyline, as only MGM could do it. The cast is fabulous. Lionel Barrymore, Beulah Bondi and Una Merkel all excel. Cedric Hardwicke is very memorable. The writing is excellent, so imaginative and different. Quite unforgettable.

Mike P
May 27, 2009
Saw this movie first as a kid, and have since seen it probably 20 times (overjoyed when I found it on DVD)...Lionel Barrymore at the top of his game. The interaction between him and "Pud" (his grandson) are memorable...Don't know why this movie has stayed with me so long, but all the characters are well developed and though I know very well how it ends, it always seems fresh...A treasure!

Jae L
½ December 5, 2008
it's like a dog of flanders mixed with elements of meet joe black. get ready for a guilt trip.

Brian S
October 1, 2008
Will likely be remade somebody, but probably poorly executed. Save yourself the trouble and watch this version. It's one of my favorite classic films.