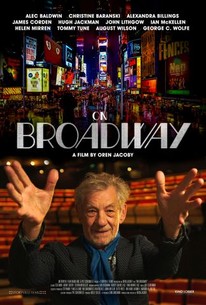 For anyone who loves theater, this contemporary history of Broadway is a pure joy! As audiences prepare for the return of live theater after an unprecedented absence of 18 months, an all-star cast tells the inside story of the last time Broadway came back from the brink. On Broadway shows how this revival helped save New York City, thanks to innovative work, a new attention to inclusion, and the sometimes uneasy balance between art and commerce. Interviews with legends of the stage and screen, including Hugh Jackman, Helen Mirren, Christine Baranski, August Wilson, James Corden, Alec Baldwin, John Lithgow, Viola Davis, and Ian McKellen take us behind the scenes of Broadway's most groundbreaking and beloved shows, from A Chorus Line to Hamilton. Archival clips of iconic performances by Lin Manuel Miranda, Patti Lupone, Bernadette Peters, James Earl Jones and Mandy Patinkin punctuate this hurly-burly ride through the main street of American show business. Now that New York City is facing an uncertain path forward in its recovery from a devastating pandemic, this documentary from Academy Award (R)-nominated director Oren Jacoby and the producers of RBG shows how Broadway led the way in the city's last great rebirth and provides a model of how it can come back again.

Critic Reviews for On Broadway

Listening to Helen Mirren or Ian McKellen rhapsodize about the immediacy and intimacy of live theater is intoxicating.

Despite all the glitz and money talk, what the film unequivocally conveys is the elemental reason we are drawn to the theater in the first place.

This smart and spirited film reminds us that there's still nothing in American entertainment like the Broadway ritual of hundreds of live, superbly talented performers playing to thousands of live, rapt theatergoers six nights a week.

The approach is similar to that of a generic jukebox musical, speeding by all the greatest hits without delving deeply enough into any of them.

"On Broadway" sure knows how to work a theater-lover's heart.

A fast-paced and entertaining, if not particularly deep, primer.

On Broadway isn't the last word on the state of Broadway musicals, but it is a well-researched history of the ups and downs of the theater district's past 50 years.

The doc doesn't have an argument. It takes audiences through the vicissitudes of the theatre scene amiably, but somewhat aimlessly.

As a celebration of theatre, featuring clips of everything from Evita to Shrek the Musical , On Broadway is hard to fault.

Too broad, no pun intended. While it's never dull, it's far from illuminating or profound.

Even though On Broadway glosses over many of the ongoing problems in the business of Broadway, the documentary is entertaining and can be informative to people who have limited or average knowledge of this great American platform of performing arts.

On Broadway is an energising, warm tribute to this unique place.

Anne Brodie
What She Said
View All Critic Reviews (20)

There are no featured reviews for On Broadway at this time.