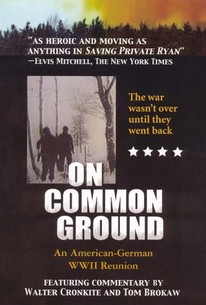 Over a half a century after the last shots were fired at the Huertgen, German and American soldiers agreed to reunite on the battlefield to reconcile the pains of the past, recount their wartime memories, and look beneath the surface to address the questions that have haunted soldiers on both sides of the war for decades. With a combined total of over 60,000 casualties inflicted on American and German soldiers, the battle waged in the Huertgen Forest is considered one of the bloodiest waged in all of World War II. Fought in the cold heart of a punishing winter, this six-month campaign continues to strike horror into the hearts of veterans on both sides. In addition to respectful interviews conducted with the soldiers who were right in the thick of the fight, this documentary also includes commentary by WWII news correspondent Walter Cronkite, respected newsman Tom Brokaw, and John Kenneth Galbraith, and offers rare footage captured by American combat cameramen.

Critic Reviews for On Common Ground

There are no critic reviews yet for On Common Ground. Keep checking Rotten Tomatoes for updates!

Audience Reviews for On Common Ground

There are no featured audience reviews yet. Click the link below to see what others say about On Common Ground!