On Her Majesty's Secret Service1969 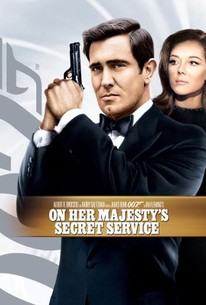 Critics Consensus: George Lazenby's only appearance as 007 is a fine entry in the series, featuring one of the most intriguing Bond girls in Tracy di Vincenzo (Diana Rigg), breathtaking visuals, and some great ski chases.

Critics Consensus: George Lazenby's only appearance as 007 is a fine entry in the series, featuring one of the most intriguing Bond girls in Tracy di Vincenzo (Diana Rigg), breathtaking visuals, and some great ski chases.

Critic Consensus: George Lazenby's only appearance as 007 is a fine entry in the series, featuring one of the most intriguing Bond girls in Tracy di Vincenzo (Diana Rigg), breathtaking visuals, and some great ski chases.

On Her Majesty's Secret Service Photos

Connery's decision to quit as Bond left Broccoli and Saltzman with a headache. The press went into overdrive speculating on Connery's successor; while the producers chose good-looking Australian actor George Lazenby after successful screen tests. Avengers superstar Diana Rigg was brought in as an added lure and the resulting action-packed film ensured that the franchise would continue.

Ingrit Back
as German Girl

Brian Worth
as Manuel

George A. Cooper
as Braun

Catherine Schell
as Nancy
View All

News & Interviews for On Her Majesty's Secret Service

View All On Her Majesty's Secret Service News

Critic Reviews for On Her Majesty's Secret Service

Director Peter Hunt manages to inject some life into this 1969 exercise with a wonderful ski chase, but otherwise the film is a bore.

Certainly no worse than the later Roger Moore efforts and, if only for curiosity value, is well worth a look.

The Bond films were bad enough even with the partially ironic performances of Connery.

What are Bond's problems now? They're too numerous, as usual, to hold the constant attention of anyone other than a charter member of Her Majesty's Secret Service.

By no means the premium Bond, but an intriguing one.

You won't find a more tragic ending in any Bond flick.

On Her Majesty's Secret Service is pure poetry. It transcends the idea of a Bond film. Gorgeously photographed, thrillingly executed, and wonderfully performed, this is the franchise zenith.

While trying to include all of the expected constituents of a Bond picture, many elements actually slow down the pacing - creating the longest runtime yet.

On Her Majesty's Secret Service is the quintessential Bond film.

The movie follows, almost too much, the exact same format of Bond flicks of the mid-sixties, and shows nothing new in character development or film technique.

Audience Reviews for On Her Majesty's Secret Service

And why am I watching a Bond film that's 48 years old? Because that's how long it took me to admit that Bond could be played by anyone other than Connery. But I was wrong. Car chases, ski chases, beautiful women, and a emotional hook! Better than I could've imagined.

Sean Connery retires from the 007 role and incomes Australian model-turned-actor George Lazenby to fill in his massive shoes. Does he succeed? OHMSS was the first in the franchise to attempt the depiction of a more-vulnerable James Bond and this movie also breaks one of the franchises biggest cliches at this point...James Bond gets married to the Bond girl! This movie has a lot of good things going for it. The cast is very well-rounded. Diana Rigg plays Tracy, daughter of a mobster and the woman that Bond falls in love with, and she is fantastic. Equally fantastic is Telly Savalas, who replaces Donald Plleasence as Bond's arch nemesis Blofeld. I think Savalas is my personal favorite actor to play Blofeld because he feels more like a person that can exist in real life. The ski-chase action set pieces are also a joy to watch and first-time director Peter R. Hunt does a pretty decent job, at times giving the proceedings a very 60's trippy vibe. Not only that, but John Barry offers some of his best music compositions for this entry. It's just a shame about Lazenby though. Lazenby's lack of acting experience really sticks out like a sore thumb and in a way, perfectly demonstrates the fact that playing 007 is not as easy of a feat as one might expect. Despite having a decent chemistry with Rigg, Lazenby's performance just left me cold due to his lack of one-screen presence and it doesn't help that most of his dialogue was awkwardly dubbed in post-production due to his heavy Australian accent. The only time Lazenby displays any sincere acting chops is in the film's heart-breaking ending. Despite Hunt showcasing decent prowess for a first-time director, his weakness lies in filming hand-to-hand fight sequences because the editing gets so choppy and the bizarre camera angles really brings unintentional comedy to some fights scenes. Also this movie was just way too long for me and could have used a better editor at the helm because I found myself bored a few too many times, especially during the drawn-out second act in which James Bond is undercover in Blofeld's lair. In the end, a part of me deeply admires how much this film attempted to shake things up with the franchise but in the end it's unique elements never end up combining into a satisfying whole.

Overlong, choppily edited, helming sloppy action, and a plot that is very preposterous and far too self-aware, "On Her Majesty's Secret Service" is is a very weak entry in the bond canon, although it arguably has some of the best sequecnes. After a string of five very original stories, the fans get this, which completely goes against the personality of it's lead character. George Lazenby is not a terrible actor, but he is a terrible choice for James Bond. The previous films focussed on one Bond girl, when in this film, I swear I counted at least 10. The pacing is ridiculous and the plot sometimes makes no sense. Sure, the filmmakers work with what they had, which was a horrible crew. This film is the epitome of a series low. "On Her majesty's Secret Service" is a serviceable flick for fans, especially for the action, but it is quite the letdown in other regards. I will give it some slight props for their effort though.

On Her Majesty's Secret Service Quotes