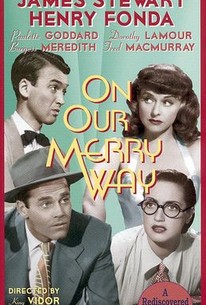 This film is a multipart comedy linked by inquiring reporter Burgess Meredith. It is Meredith's job to interview several people, asking them what effect children have had on their lives. Meredith returns to the newspaper office with a black eye, which earns him the sympathy of co-worker Paulette Goddard.

Critic Reviews for On Our Merry Way

The cast couldn't have been better. The story's execution falters because a scene here and there is inclined to strive too much for its whimsical effect.

Since Mr. Meredith produced the picture, with Benedict Bogeaus as his partner in crime, it's his privilege, we suppose, to be terrible. He appears to be having the most fun.

Obviously, no expense was spared to make this a humdinger and a bell ringer.

The highlight is Lamour singing a spoof about her on-screen sarong persona. For some fetishists, seeing Meredith's shaven bare chest might supply another.

Audience Reviews for On Our Merry Way

How'd they get so many top rank stars to appear in this meager offering? Not dreadful but very minor. Jimmy & Henry's segment is the best plus there's a chance to see MacMurray & Demerest team up years before My Three Sons.

A drama anthology film if that interests you, I found it annoying, they should have stuck with the first story.

On Our Merry Way Quotes