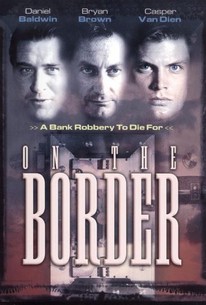 A corrupt security guard finds his already shaky loyalties stretched to the breaking point in this action drama. Jake Barnes (Casper Van Dien) is hired to guard a bank in a small town near the Texas/Mexico border. Jake's boss wants him to keep an eye on his wife, whom he believes is being unfaithful to him; unfortunately, while keeping tabs on her, Jake falls into a sexual relationship with the woman. Jake is also involved with Kristen (Camilla Overbye Roos), who is urging him into another betrayal of his boss's trust -- a group of drug dealers are laundering $7,000,000 through the bank, and Kristen is in cahoots with a group of thieves eager to steal the fortune. Kristen and his partners want Jake's help, and they will do whatever they have to do to get it. On the Border also stars Bryan Brown, Daniel Baldwin, and Bentley Mitchum.

Frank Bowles
as Bagman No. 1

Heidi Carrasco
as Exotic Dancer No. 1

Pavel Jezek
as Bagman No. 2

Critic Reviews for On the Border

There are no critic reviews yet for On the Border. Keep checking Rotten Tomatoes for updates!

There are no featured reviews for On the Border at this time.

On the Border Quotes