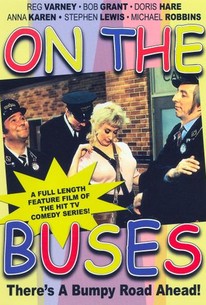 On the Buses Photos

Based on a popular British television series from the late sixties, On the Buses centers on the chaos caused in a bus depot when the boss hires a passel of female bus drivers. This marked the first of three theatrical features based on the series (the second and third installments were the 1972 Mutiny on the Buses and the 1974 Holiday on the Buses, respectively). Though all three films were critically savaged, they grossed dollar one in Great Britain, particularly this first installment - eliciting a host of sequels and imitators. The Motion Picture Guide wrote of On the Buses, " The humor is sexist, of course, and infantile, with no wit or sophistication, which of course ensured its appeal to a large segment of the masses."

Wendy Richard
as housewife
View All

Critic Reviews for On the Buses

There are no critic reviews yet for On the Buses. Keep checking Rotten Tomatoes for updates!

Audience Reviews for On the Buses

Classic comedy from a bygone era. Nothing much more to say about this really. The humour is still funny and the acting is pretty good and it just reminds you of a time when life seemed so much less stressful.

On the Buses Quotes