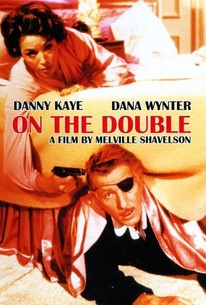 On the Double Photos

This one-dimensional comedy with Nazi Germany as a source of humor, whether indirect or not, may step past the boundary of funny topics for some viewers. But Danny Kaye has some terrific moments as Ernie Williams, an American G.I. chosen to double for a British general as the day of the Allied invasion of Normandy approaches. As it turns out, the general is killed, and his chauffeur (Diana Dors) is a Nazi spy who then gets Ernie kidnapped and sent to Germany. That is when the chase and all the disguises begin -- Ernie as Marlene Dietrich, as a Nazi pilot, and even as Hitler, using all the tricks in the book to escape capture.

A. Ben Astar
as Gen. Zlinkov

Critic Reviews for On the Double

There are no critic reviews yet for On the Double. Keep checking Rotten Tomatoes for updates!

Audience Reviews for On the Double

There are no featured audience reviews yet. Click the link below to see what others say about On the Double!

On the Double Quotes