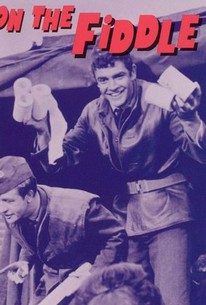 On the Fiddle Photos

In this British WW II comedy, two smarty-pants con men think they have finally found the perfect scam: they will join the British Army and then bilk the soldiers out of their pay, rations, and furloughs. It works for a time until the head con man cons himself and his partner into becoming accidental heroes. The film is also titled Operation Warhead and On the Fiddle.

Gary Cockrell
as US Snowdrop

Critic Reviews for On the Fiddle

Audience Reviews for On the Fiddle

A pre-Bond Connery plays a bit of a simpleton is this quirky British comedy. It's more a series of sketches rather than a complete film with Lynch (the main character) and Connery involved in a series of cons during WW2. They make a great double act and they're supported by some great British comedy talent. The film takes an uneasy turn to the dramatic towards the end but up till then it's an enjoyable (although slight) comedy.

On the Fiddle Quotes