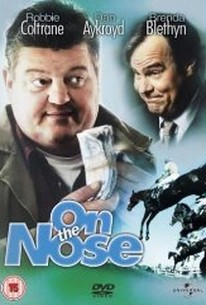 A luckless gambler finally finds the secret to picking winners at the track -- a head in a jar -- in this comedy. Brendan (Robbie Coltrane) is a janitor at a university who has a fondness for gambling, especially betting on horse races. However, he doesn't have much skill at it, and poorly considered bets have drained the bank account he'd set aside for his daughter's education. Brendan's wife (Brenda Blethyn) has made Brendan promise to give up gambling, but when their daughter announces she's just been accepted to Trinity College in Ireland, Brendan has to come up with the tuition money, and fast. While doing his sweeping at work, Brendan makes a remarkable discovery -- the preserved head of an aboriginal tribesman who, under proper conditions, can pick the winners in horse races. Despite his promise to his wife, Brendan takes his new discovery and puts it to work forecasting upcoming races, and while the head's predictions are as good as gold, Brendan soon finds not everyone is happy about his new run of good luck. His wife is angry that he's gambling again, mobsters want to know what his secret is, a scholar from Australia insists that the head be returned to the people of his tribe, and a dean at the college (Dan Aykroyd) has some questions for Brendan about his discovery. ~ Mark Deming, Rovi

Don Baker
as Barclay
View All

Critic Reviews for On The Nose

There are no critic reviews yet for On The Nose. Keep checking Rotten Tomatoes for updates!

There are no featured reviews for On The Nose at this time.

On The Nose Quotes