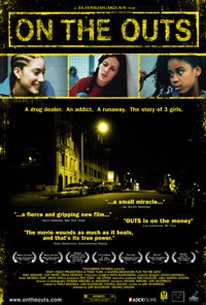 On the Outs Photos

Three teenage girls struggle to survive in the urban jungle of their hardscrabble New Jersey neighborhood in this fact-inspired independent drama. Oz (Judy Marte) is an unapologetically tough 17-year-old who oversees a team of drug dealers, but beneath her hard shell is a soft heart as she cares for her younger brother who is mentally challenged (Dominic Colón). Suzette (Anny Mariano) is 15, and her mother is determined that her daughter is going to make something of herself -- which makes matters all the worse for Suzette when her boyfriend gets her pregnant then refuses to take his share of the responsibilities. And Marison (Paola Mendoza) is a young single mother who is trying to hold on to custody of her daughter while fighting a losing battle with drug addiction. On the Outs received its world premiere at the 2004 Toronto International Film Festival.

Autumn Collier
as Autumn
View All

Critic Reviews for On the Outs

Harrowing and heartbreaking, On the Outs is persuasively performed by fine actors, yet has the real feel of a documentary.

It succeeds, if unevenly.

A work of harrowing, visceral power.

The performances are terrific: None is showy or actorish but earnest, truthful jobs laying bare souls in anguish.

Documentarians by trade, the directors use rough DV cinematography and no score to amplify their tale's sense of lived-in reality.

It's raw, it's gritty, and it's excellent.

Nothing short of awe-inspiring: riveting and real, a truly important work which is, blessedly, about something.

A trio of troubled Latinas linked by lawlessness in super-realistic, female empowerment flick not to be missed.

A sporadically powerful but uneven little film, in which moments of insight and conviction alternate with others that seem contrived and mawkish.

Judy Marte once again shows that she's an actress to watch. She's a commanding presence on screen and demands that you feel for her, even though her story is not the most sympathetic.

Granted that On the Outs doesn't explore any new realms of destitute city life but it still contains unspeakable moments of desolation and disillusionment.

Audience Reviews for On the Outs

There are no featured audience reviews yet. Click the link below to see what others say about On the Outs!

On the Outs Quotes