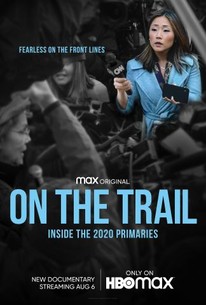 On the Trail: Inside the 2020 Primaries Photos

On the Trail is a documentary feature following a group of female CNN reporters & embeds on the road as they cover the events that unfolded beginning in January with the Democratic primaries leading into the Covid-19 outbreak in March and April. Viewers will get a rare behind-the-scenes look at what it is like to work for CNN during one of the busiest times of the year. How do you hold up after months on the road, eating terrible food and flopping in motels? What happens when your candidate drops out -- or were you secretly hoping it would happen? And what do you learn about America by spending every day in its small towns? This doc features unprecedented access to the campaign press corps revealing how we pick our presidents -- and how the media really works. On the Trail will take the biggest story in America and bring it into intimate focus as viewers live the Democratic primary battle alongside these smart, vibrant, and occasionally exhausted women.

Critic Reviews for On the Trail: Inside the 2020 Primaries

The whole project is frustratingly indicative of CNN's political coverage at large, which-despite having the resources and hired talent to do better-manages to point its camera in the correct direction and still miss the big story entirely.

On the Trail opens the door to important conversations regarding objectivity and bias, and the deeply flawed tendency to perpetuate false equivalency in the effort to appear objective and unbiased.

It's easy to care about the women in On the Trail, and the issues they face. But the film around them doesn't feel built to last -- or to exist in a moment beyond the one for which it was intended.

CNN Films making a documentary about CNN employees [has an] inherent bias ... However, if people want to see ... female colleagues in TV news where their work relationships are about camaraderie instead of catfights, then this movie serves that purpose.

For teens interested in careers in television journalism, On the Trail: Inside the 2020 Primaries is a must-see.

Whether good or bad, hustling is a real and required part of making it in media - and On the Trail shows the struggle. And on top of it all, the documentary is well-produced; the visuals are crisp and the shots are varied.

In plenty of ways, On the Trail: Inside the 2020 Primaries feels very typical of CNN's uniquely impressive ability to try and make celebrities of their reporters rather than doing any actual reporting. I suppose that's only fitting.

There are no featured reviews for On the Trail: Inside the 2020 Primaries at this time.

On the Trail: Inside the 2020 Primaries Quotes