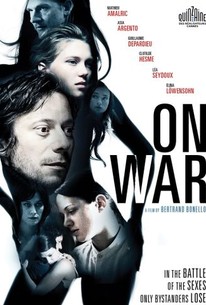 A filmmaker going though a midlife crisis stumbles into a new way of examining life in this comedy drama from France. Bertrand (Mathieu Amalric) is a movie director who has lost touch with his muse and is desperate to come up with an idea for his next picture. While visiting a funeral home as he tries to brainstorm, Bertrand becomes stuck in a coffin and ends up spending the night trapped in a box. Shaken but strangely invigorated by the adventure, Bertrand realizes he needs new experiences and finds a good source for them when a chance meeting leads him to an urban commune known as the Kingdom. Led by Uma (Asia Argento), the young people who make up the Kingdom often dress in animal costumes and engage in unusual consciousness-expanding rituals. Fascinated by what he's found, Bertrand becomes a frequent visitor at the Kingdom, and while his girlfriend, Louise (Clotilde Hesme), tries to encourage him in his self-exploration, she's frequently bemused by his methods. De la Guerre (aka On War) was screened as part of the Directors' Fortnight series at the 2008 Cannes Film Festival.

On War's trajectory is both purposefully vague and weirdly specific, not least of all because its protagonist is a French film director named Bertrand.

There are no featured reviews for On War (De la guerre) at this time.