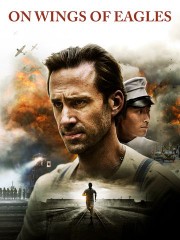 On Wings of Eagles

On Wings of Eagles Reviews

Emilie B
March 12, 2018
TRULY INSPIRATIONAL! AN AMAZING FOLLOW-UP TO CHARIOTS OF FIRE

Kathy B
December 16, 2017
A true story that I was totally unfamiliar with.. Recommended

½ November 7, 2017
This movie was worse than sharknado

Kevin B
November 7, 2017
For a man thought so highly of because of his faith, this movie casts minimal exposure on it.

November 4, 2017
Wow! I wish "On Wings Of Eagles" played in more theaters and one closer to my home to get a group of my friends together! It was a thought provoking movie and would be great for my church life group! Eric Liddel was an amazing Christian man! Not sure I could go through what he did and still pray for my enemies! He is truly an inspiration! I highly recommend seeing this movie. I guess you can also see it on Video On Demand, if not near you. Have tissues handy!

Lisa H
November 3, 2017
This is a quiet film, but one well worth seeing for its reminder that each of us, in our own way, are called to rise up and do what we know to be right. Some storytelling tactics have likely changed historical details here. Sensitive viewers may be disturbed by torture scenes and a graphic death in the film.

But for its fine acting, this movie look at a moment in history we hope will be left behind forever but that we can't afford to forget. A portrayal of one man's all-too-quick "race" through life, On Wings of Eagles is "the rest of the story" at its best.

Vincent L
July 2, 2016
As a movie lover, I frequently rely on movie critic and Academy Award performance to make a decision whether I would spend 2-3 hours on the selection.
The "Chariots of Fire" has remained as my best movie ever seen, of which I can see my life was and is inspired by the movie and Eric Liddell - 1924 Paris Olympics winner - missionary's dedicated life to this world.

Therefore I struggled a lot after seeing the movie review of SCMP of "The Final Race", the many unknown and re-discovered events of Liddell of his final race and life before the end of WWII.

Should I go watching even though this review is so bad?

I finally decided to watch this movie today.

After watching this movie, there are two things that I want to do strongly.
One, on the contrary, this near-epic movie was beautifully produced that I want to share with all my friends, despite the low attention.
Two, I want to refute and defend this movie! The SCMP movie critic has done a un-deserving and unfair review that leads me to question whether he has dome some documentary readings of the life of Eric Liddell in this "Chariots of Fire" sequel before he wrote. Is he aware that the director and a research assistant has spent years of research and interviews with many living witnesses in China, U.K., Canada to bring this movie to the spotlight, though some have been sporadically found in Chinese written books?
Page 1 of 1